Saavy investors know that an evolving industry like cannabis takes time to show its full potential. The sector is sizzling with some amazing growth stocks, and all that’s needed is a little patience. The U.S. cannabis market is burgeoning. Not only are domestic players taking advantage of that growth, but their Canadian counterparts are also getting ready to expand in the U.S. when marijuana becomes legal at the federal level. There are many options to choose from, but my attention is on these three. 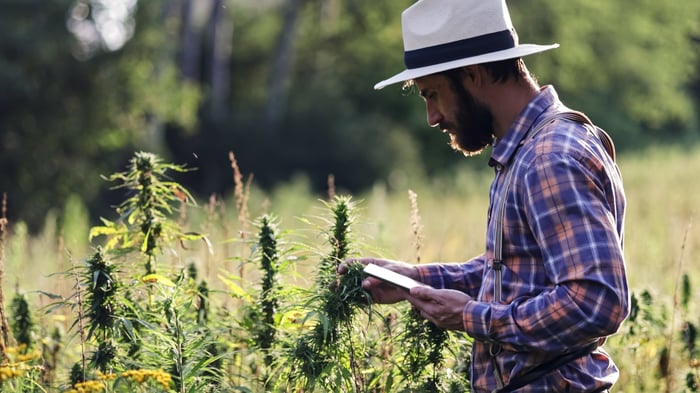 This Illinois-based multistate operator (MSO) has made quite a name for itself. The company offers medical and recreational cannabis products under the brands Beboe, Dogwalkers, Dr. Solomon’s, Incredibles, and more.

In its second-quarter ended June 30, total revenue surged 85% year over year to $222 million.

The company stated Illinois and Pennsylvania drove most of the revenue growth. Illinois has seen outstanding recreational sales since it legalized cannabis last year. Q2 also marks Green Thumb’s fourth consecutive quarter of profitability; profits came in at $22 million versus a net loss of $13 million in the year-ago period.

With a total of 65 retail stores as of October, the company is growing revenue at a staggering rate. It still holds licenses for 111 retail locations across 14 U.S. states. As cannabis is illegal at the federal level, most states are very restrictive about issuing licenses. Licensing also involves a lengthy regulatory process.

Therefore, securing a license is a competitive advantage for Green Thumb, making it easier to expand later. The company recently opened its third store in New Jersey, a state that recently legalized recreational marijuana. But retail sales won’t begin until 2022. Having a market presence in the medical segment will give a competitive advantage to Green Thumb when the recreational markets are up and running. It will help the company create brand awareness. We should know more about Green Thumb’s growth strategies in its upcoming third-quarter earnings report on Nov. 10.

The smart strategy employed by this MSO is targeting key markets, like Ohio, Virginia, and Pennsylvania, that offer limited licenses to cannabis companies. That helped the company achieve a loyal customer base for its products. As a result, Columbia Care grew its total revenue by a whopping 232% year over year to $109 million.

It also resulted in adjusted earnings before interest, tax, depreciation, and amortization (EBITDA) of $16 million compared to a loss of $4.7 million in the year-ago period.

It isn’t profitable yet, but with rising top-line growth, consistent EBITDA, and lower costs, it won’t be long before generating profits.

Tilray is the only attractive pot company in the Canadian cannabis space right now. Its peers, like Canopy Growth and Aurora Cannabis, are far from profitability. Meanwhile, the new Tilray (after its merger with Aphria) has proven to be a much stronger company. Results for its fourth quarter ended May 31 (first earnings post-merger) were impressive. Its net revenue for the quarter increased 25% to $142 million. For the full fiscal year 2021, Tilray reported total net revenue of around half a billion. It also recorded a net profit of $33.6 million versus a net loss of $84.3 million in the year-ago period.

The new Tilray has a huge advantage in the European market. Aphria already had a vast international presence in Europe and other countries. With Tilray’s low-cost production facility in Portugal, management expects to expand to Poland, Italy, the U.K., France, the Netherlands, and Israel (when full legalization happens in all these countries). With a global presence, Tilray might just be able to become a top cannabis company.

Tilray also ended the year strong with a stable balance sheet holding cash and cash equivalents of $488.5 million. In addition, the company has already achieved cost synergies from the merger of $35 million, and is on track to achieve the $80 million target in the next 16 months.

A merger of this magnitude needs time to integrate and show its full potential. So a small investment in Tilray can go a long way. Moreover, once federal legalization happens, Tilray will be in a much more secure position to take advantage of the U.S. cannabis market.

As domestic players, Green Thumb Industries and Columbia Care will have a first-mover advantage to expand in the U.S. cannabis market should legalization happen.

Analysts expect an upside of 61%, 173%, and 39% from Green Thumb, Columbia Care, and Tilray, respectively, over the next 12 months.  Smart growth strategies and strong financials, reflected by surging revenue, a clear path to profitability, and stable balance sheets, make a strong case for these hot cannabis stocks.