Investing in cannabis stocks may sound like risky business with it not legalized at the federal level in the US and let’s face it over the past sort of six to nine months it has been one of the most volatile sectors.

Certainly, it is hard to see weed still being illegal in the US five years from now. On that note, let us look at five Canadian marijuana stocks.

Canopy Growth possesses an acquisition option for Acreage Holdings should marijuana be legalized at the federal level in the US.

WEED closed Monday, May 9, at C$7.23 and its trajectory over the last year has generally been downward.

Despite losing over eight per cent during the trading session, it has a much better YTD performance (loss of 18.5 per cent) than the stocks of the big companies by market cap on this list.

Tilray Inc has exposure to the US market for its cannabis products via Manitoba Harvest. It also accesses its southern neighbor’s beer market through SweetWater.

Like the stocks of the two other big cannabis companies on this list – Canopy Growth and Cronos – TLRY has, for the most part, had a downward trajectory over the last year.

The stock’s closing price on Monday of C$5.68 is its 52-week low and it is now probably on the brink of being undervalued.

TLRY has a price-to-earnings (P/E) ratio of 12.2. This denotes how many dollars needs to be invested for each dollar of profit earned.

Another penny stock, XLY closed at C$0.155 Monday and despite losing over three per cent in the session, it is still in the green by nearly 15 per cent month-to-date and about seven per cent over the last 30 days.

In addition to directly selling hemp-derived CBD products in the US, the company has an option to acquire 10.5 per cent of PharmaCann, which operates in multiple US states.

CRON has performed better than the other two big companies on this list, down 26.7 per cent YTD. It closed at a new 52-week low of C$3.65 Monday.

The last two times this year it came into this region, it rebounded. 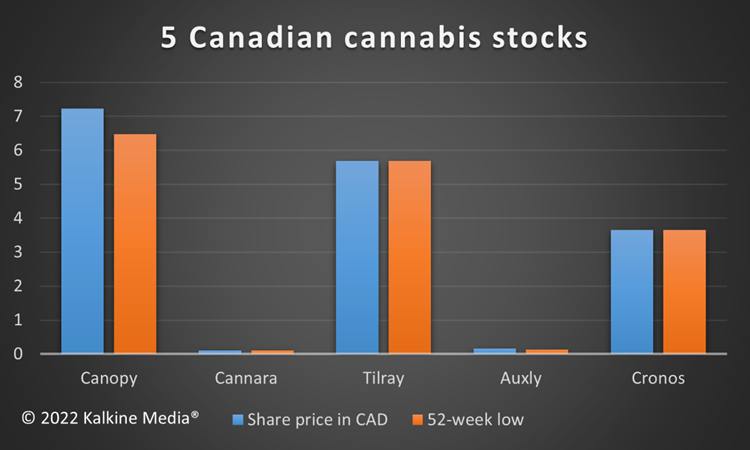 The S&P/TSX Cannabis Index has lost 38.4 per cent year-to-date (YTD) and nearly seven per cent Monday. The above stocks are trading at, or just slightly above their 52-week lows.

In terms of their current valuation metrics there isn’t much that is impressive. But they make for an interesting watch long-term, over the next 10 years, considering legal developments in the sphere.

Three are big established companies and two are penny stock companies that might see growth considering they have fared better than the sphere has in this bearish phase.

Also read: How does current inflation compare to 1970s stagflation?

Please note, the above content constitutes a very preliminary observation based on the industry, and is of limited scope without any in-depth fundamental valuation or technical analysis. Any interest in stocks or sectors should be thoroughly evaluated taking into consideration the associated risks.