It’s been nothing but market doom and gloom for cannabis companies this year, with the Advisor Shares Pure U.S. Cannabis ETF falling 19% so far this year. That’s the short-term news. The long-term is cannabis is expected to have huge growth potential. According to a report by BDS Analytics, the global cannabis market was estimated at $30.6 billion in 2021 and is expected to grow to $62.1 billion by 2026.

Verano Holdings ( VRNO.F -0.96% ), Green Thumb Industries ( GTBIF -0.83% ) and Innovative Industrial Properties ( IIPR -7.50% ) all are worth buying in April. If you look beyond the market downturn for cannabis stocks that has driven down the share prices of these companies over the past two months, you’ll find three of the more successful cannabis businesses already showing a profit. 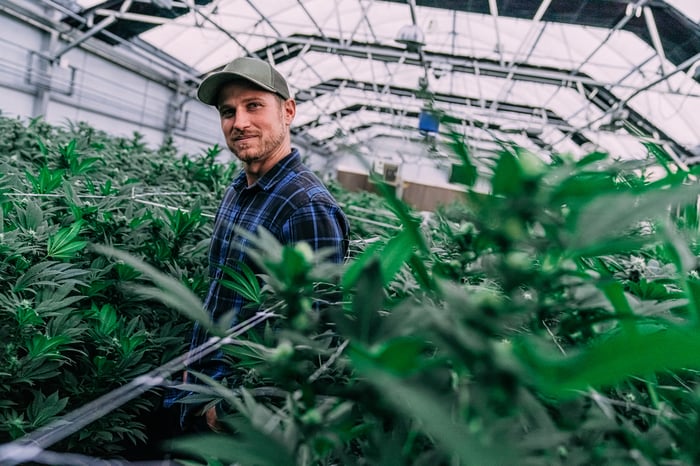 Verano has come a long way in a short time

Chicago-based Verano Holdings only went public in February 2021 and in a short period, it has become one of the most profitable cannabis companies. Its growth has come from focusing on high-level brands and by prioritizing its business in limited-license states. It will soon have 10 dispensaries in Illinois, 44 in Florida, 13 in Pennsylvania, eight in Minnesota, six in Arizona, five in Nevada and Ohio, four in New York and three in New Jersey, all limited-license states that mean less competition for Verano.

The company’s shares are down more than 30% this year, but that has more to do with the overall business trends for cannabis than Verano’s own financials. The company’s share price has also declined because Verano delayed reporting its full-year and fourth-quarter numbers in April. That’s concerning, but the company said the delay stems from a disagreement between the company’s accountants over a 2019 transaction involving only one dispensary. The new date for the report is May 2.

If that’s truly the case, then Verano is a good buy right now, based on its third-quarter numbers, where it reported revenue of $206.8 million, up 106% year over year and 4% sequentially. The company had adjusted operating income of $96.9 million in the quarter, tops among cannabis companies, and it reported adjusted earnings before interest, taxes, depreciation and amortization (EBITDA) of $111 million, or 54% of revenue, up 98.4% year over year and an improvement of 35.8% sequentially. Once its acquisition of Goodness Growth Holdings is completed, Verano will have 113 retail locations across 18 states with plans for more than 120 retail locations.

Green Thumb Industries, also based in Chicago, just opened its 77th dispensary. It has retail locations in 15 states and a strong track record of profitability with six consecutive quarters of positive net income . During the past five years, it has increased revenue by 1,330%.

Despite those numbers, the company’s shares are down 23% so far this year. Investors may feel that with a price-to-sales ratio of a little more than 4, it may be overpriced compared to competitors such as Trulieve Cannabis and Curaleaf Holdings, but Green Thumb’s stability and consistent profits justify that higher ratio.

Innovative Industrial Properties is essential to the industry

Innovative Industrial Properties’ revenue has climbed nearly as much as Green Thumb’s over the past five years, rising by 1,280%. More importantly, since it is a real estate investment trust (REIT), IIP’s adjusted funds from operations (AFFO) have grown even more over that five-year span — by 1,520%. IIP, based in San Diego, buys up properties from cash-strapped cannabis growing companies and leases them back with triple-net leases that put all property expenses on the tenants, including capital repairs and replacements.

A big reason for the company’s growth is cannabis companies need capital to grow and IIP is one of the few places they can get. Because federal prohibitions against cannabis have made it difficult for the companies to use traditional means of funding, such as bank loans, the sale-leaseback process give growers working capital. IIP’s business model has the advantage of being an early starter in the nascent industry, giving it a significant moat. On top of that, its leases are generally long-term, from 15 to 20 years, so IIP’s cash flow is predictable.

As of Feb. 23, the company had 105 properties covering 7.9 million square feet of space, with an average lease term of 16.6 years. Besides a strong record of growth, investors are drawn to IIP by its substantial dividend. Last month, the company raised its quarterly dividend by 17% to $1.50 per share. At its price as of Thursday, the dividend offers a yield of 3.82%. The yield has grown this year because the stock’s price has dropped more than 28%. The company has raised its dividend each year since it began paying one in 2017 and that growth has accelerated with a dividend increase in six of the past seven quarters.

No time to be discouraged

While market concerns and the turn toward value stocks have lowered cannabis share prices, it’s important to use the opportunity. All three cannabis companies are profitable and increasing revenue. In the long run, they are exactly the type of companies that will benefit most whenever the markets again favor cannabis stocks. In the meantime, they can be had at significant bargains while you wait for their shares to rise, and in Innovative Industrial Properties’ case, you’ll get a nice dividend while you wait.