Investing is a long-term game. To earn fruitful returns, one has to have a strong appetite for risk and an ample amount of patience. Also, choosing the right growth stocks is important. My eyes are on these three outstanding stocks. Healthcare company Intuitive Surgical (NASDAQ: ISRG), and cannabis companies Trulieve Cannabis (OTC: TCNNF) and Green Thumb Industries (OTC: GTBIF) are set for a strong future.

Intuitive, Green Thumb, and Trulieve’s stocks have outperformed the market, soaring 96%, 235%, and 121%, respectively, in the last two years compared to the S&P 500‘s gain of 82%. Note that this happened amid a global pandemic that took a toll on most sectors. Will these three be able to work their magic again? 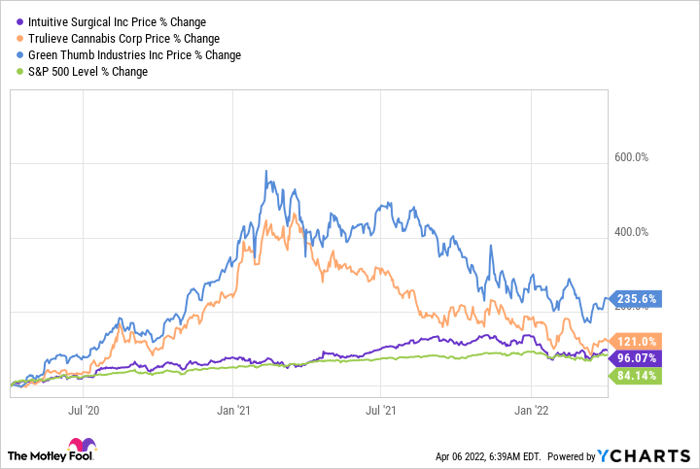 This Florida-based multi-state operator (MSO) has come a long way from a small medical cannabis company to the cannabis powerhouse it is now. It operates 162 dispensaries nationwide, with a dominant presence in Florida with 113 dispensaries.

Its consistent stellar performance every quarter reveals how big the company is becoming. It ended 2021 with close to $1 billion in revenue. Its fiscal third quarter marked its 16th consecutive quarter of profitability from an operational standpoint. Adjusted net income grew 2% year over year, to $123 million for the full year. An 80% year-over-year growth in revenue to $938 million drove profitability. 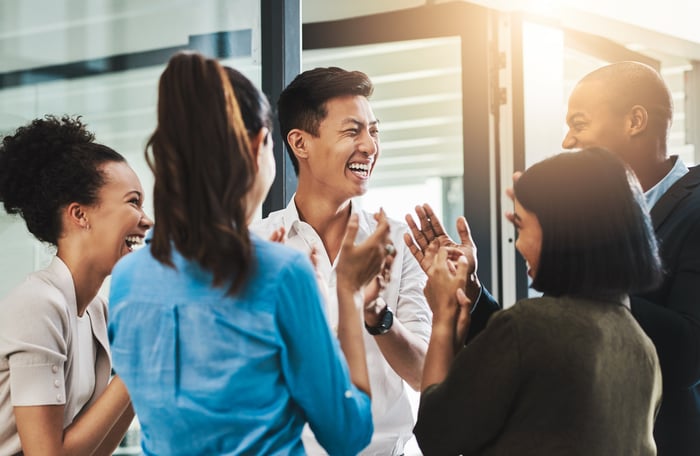 The company expects 2022 to be another tremendous year. Management stated revenue could be in the range of $1.3 billion to $1.4 billion and adjusted earnings before interest, tax, depreciation, and amortization (EBITDA) in the range of $450 million to $500 million for 2022. Trulieve’s strategy of acquiring Harvest Health last year was a smart move. It gave the company access to the Arizona, Pennsylvania, and Maryland cannabis markets.

Another rising star in the cannabis space is this Illinois-based MSO that clocked in GAAP profits for six quarters in a row. For the full year of 2021, net income of $75.4 million was an impressive increase from $15 million in 2020, driven by a solid 60% growth in revenue that came in at $893 million. Increased traffic from Green Thumb’s 73 dispensaries helped the company achieve a good end to the year. Its Q4 was also its eighth consecutive quarter of positive cash flow from operations, which the company can utilize to further expand this year.

Intuitive Surgical has become a renowned player in the medical devices industry. Minimally invasive surgery is the future of surgery. And Intuitive holds a dominant position in the robotic-assisted surgery field with its state-of-the-art robotic system. Its da Vinci robotic system provides surgeons with 3D high-definition views along with the use of tiny instruments for smooth and convenient precision during surgeries.

The company saw a 19% increase in worldwide da Vinci procedures from the year-ago period. Additionally, it earns revenue from the sale of disposable instruments and accessories used by the machines, which jumped 13% to $843 million from the prior quarter. In Q4, total revenue came in at $1.5 billion, a jump of 17% year over year, while net profit jumped 4% to $381 million from the comparable quarter a year ago.

Many other companies like Johnson & Johnson, Stryker, and even Medtronic have entered this segment but none have been able to give Intuitive a tough fight. Moreover, high switching costs will keep Intuitive’s position intact.

Its dominance in the market with its da Vinci system has allowed it to increase its free cash flow by nearly 121% in the past five years. Intuitive can utilize this money on more innovative products.

Can they double again?

I believe they can. The domestic MSOs have already proven that even with a limited legal market they can do wonders. Both Trulieve and Green Thumb have risen to be cannabis powerhouses. With more states legalizing cannabis over the next few years, I have no doubt the stocks could double or more. Analysts see upsides of 173% and 77% for Trulieve and Green Thumb stock, respectively, in the next 12 months.

Meanwhile, Intuitive’s dominance and growth in the robotic-assisted surgery segment have drawn up a shiny future for the company. The minimally invasive surgery field is just getting started. This market could grow at a compound annual rate of 18% to be worth $22 billion by 2028, according to Verified Market Research.

Analysts see an upside of 11% for Intuitive’s stock in the next 12 months. All three stocks are trading almost 50% below their 52-week lows, making it the right time to buy and hold these exciting stocks for the long haul.