This article is excerpted from Tom Yeung’s Moonshot Investor newsletter. To make sure you don’t miss any of Tom’s potential 100x picks, subscribe to his mailing list here.

In the past week, palladium has become the new darling of social media. The metal’s price has risen another 10%, sending thousands of investors to Wikipedia to research what palladium is even used for.

The price rise isn’t particularly surprising. Nor is the sudden interest in metallurgy. Russia was the world’s largest exporter of palladium, supplying a quarter of the world’s consumption. Sanctions are now putting the entire auto supply chain on high alert.

But the attention over palladium, oil and wheat overshadow some stunning second-order bets. So, if you missed out on the oil-and-metal boom, many other bets are beckoning now.

I was on the earlier end of the energy boom. I made my choice of Peabody Energy (NYSE:BTU) for our Christmas contest in December 2020 when prices hovered at $2. And my November call on Enservco (NYSEAMERICAN:ENSV) happened when the company was still a penny stock.

But many of these top picks have now run their course. An investor buying BTU at $26 today cannot expect the same 1,200% returns. Such a feat would make Peabody worth 3.5x more than the rest of the U.S. coal industry combined.

And Enservco’s meme-stock run to $8.76 is unlikely to be repeated. (Those still holding onto ENSV should ditch their shares). Natural gas prices tend to have an upper limit since export capacity is limited.

In other words, like the latecomers to a poorly-stocked buffet, many investors today are left with slim pickings. All the top commodity-based stocks have been bid to the moon.

The Second-Order Winners of Rising Inflation

And second-order companies are showing better value than ever before.

For investors looking for the next big thing, these second-order companies have the chance to go 2x…5x…10x.

When I first mentioned Allegiant Gold (OTCMKTS:AUXXF) in February, its CEO had just bought another 15,650 CAD of shares.

“Allegiant Gold already has a heavy insider presence. Seeing its CEO double down on his bet suggests that there’s even more gold in them hills,” I wrote.

The following month, the firm announced a 4 million CAD investment by Kinross Gold (NYSE:KGC). AUXXF shares are now up 45% since its first mention in the Moonshot Investor.

Rising inflation rates are now giving investors a second chance to jump in. According to a study by Reuters, gold prices are second only to 10-year inflation-protected bonds when it comes to outrunning inflation. And gold exploration firms like Allegiant Gold essentially become cheap options on commodity prices.

During periods of rising commodity prices, shares in these smaller exploration firms tend to outperform their more stable brethren.

Insiders have already taken note. In the past two weeks, the firm’s CFO and a director have joined CEO Peter Gianulis in adding to their stakes.

And if history is a guide, they’re signaling there’s still more gold yet in them hills.

In particular, CryoMass Technologies (OTCMKTS:CRYM) is emerging as a big winner.

The company in question has a straightforward business. By using a patented freeze-drying system, CryoMass helps farmers extract more THC out of their cannabis crop. And with the cost of labor and equipment rising, these growers are reaching for every tool to improve yields.

Share prices for CryoMass are already up 50% since getting recommended in the Moonshot Investor in February. And much like other agricultural processing companies, CRYM will likely continue rising as input prices stay stubbornly high.

There are, however, some short-term concerns. Two weeks ago, shareholders converted warrants into over 50 million shares. While it’s a long-term bullish sign, such a significant move creates short-term selling pressure.

Cannabis stocks are also a magnet for speculators. In March, cannabis ETF AdvisorShares Pure Cannabis (NYSEARCA:YOLO) prices rose 20% after the U.S. House indicated it would pass the Marijuana Opportunity Reinvestment and Expungement (MORE) Act. Shares fell back after investors realized the bill had zero chance in the Senate.

But longer-term investors shouldn’t care. As inflation takes its toll on agricultural firms, efficient processing companies like CryoMass are the ones that stand to gain.

If you’re looking at these speculative penny stocks and saying, “there’s no way I’m going to take these risks,” let me tell you this.

While Moonshot stocks can add a kick to a well-diversified portfolio, they’re inherently risky if bought alone.

…And you’re not sure if you packed an anvil in there by accident.

But I also have some good news. InvestorPlace’s Louis Navellier recently revealed his No. 1 stock to buy now. It’s a stock that could tempt Warren Buffett himself.

And the best part? Louis is giving it away for free in an exclusive presentation.

To watch it and get his no. 1 stock pick, click here.

Last week, crypto investors sued developer Tyler Gaye for spending the $1 million he raised on a personal NFT collection rather than on building the “0peNFT” NFT exchange as he promised.

The legal action follows precedent from last month when the U.S. Justice Department arrested the 20-year-old creators of the rug-pulled Frosties NFT project. The young team had bilked investors of $1.1 million after promising “tokens, rewards, giveaways, mint passes, and early access to a future game.” 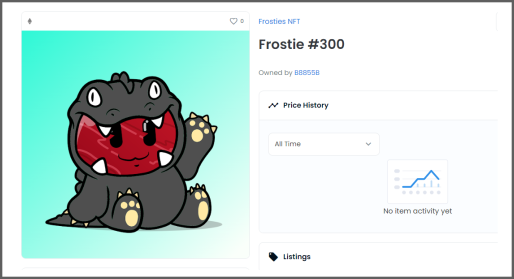 The law community has finally decided that stealing from crypto investors should be illegal.

The precedent for these suits are about as old as some of my jokes. Modern class action started in the mid-1950s, and investor-shareholder lawsuits quickly followed. It was only a matter of time before crypto scammers got targeted.

Of course, there are plenty of other crypto con artists, and even more slighted buyers looking for justice. Heather Morgan (AKA the Crocodile of Wall Street) can’t possibly be the only scammer who left an extensive (and embarrassing) paper trail online.

But then again, considering some of the unforced errors we investors make, perhaps it’s the lawyers who will get the last laugh.

P.S. Do you want to hear more about cryptocurrencies? Penny stocks? Options? Leave me a note at moonshots@investorplace.com or connect with me on LinkedIn and let me know what you’d like to see.

Thomas Yeung is an expert when it comes to finding fast-paced growth opportunities on Reddit. He recommended Dogecoin before it skyrocketed over 8,000%, Ripple before it flew up more than 480% and Cardano before it soared 460%. Now, in a new report, he’s naming 17 of his favorite Reddit penny stocks. Claim your FREE COPY here!

On the date of publication, Tom Yeung did not have (either directly or indirectly) any positions in the securities mentioned in this article.

Tom Yeung, CFA, is a registered investment advisor on a mission to bring simplicity to the world of investing.