Cresco Labs ( CRLBF -3.56% ), the ambitous multi-state operator (MSO) marijuana company based in Illinois, saw its share price dive by nearly 8% on Wednesday. This was due to two factors — a pricey acquisition, and the company’s latest set of quarterly results. I’ll tackle the deal (specifically the acquisition of peer Columbia Care) in another article; for now, let’s take a gander at those fundamentals.

For its fourth quarter of 2021, Cresco recorded $218 million, an all-time high for the period. That tally was up by 34% year-over-year, on the back of same-store sales that rose 28%.

On the bottom line, Cresco remains unprofitable. On the bright side, its net loss narrowed considerably to $11.9 million from the year-ago shortfall of more than $41 million. 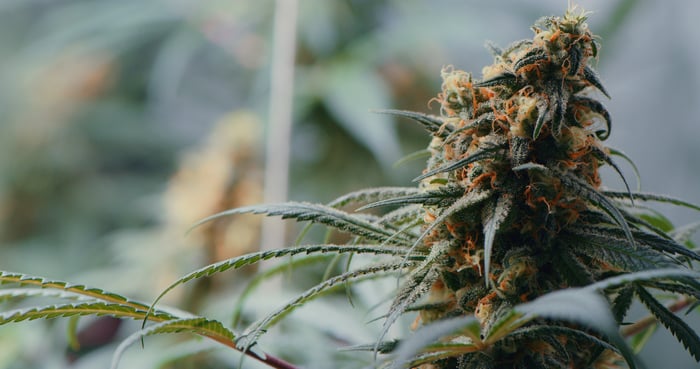 Marijuana companies are frequently loss-making, so they prefer to use earnings before interest, taxes, depreciation, and amortization (EBITDA) as a profitability yardstick. For Cresco, non-GAAP (adjusted) EBITDA landed well in positive territory at nearly $35 million, in stark contrast to the almost $10.5 million loss of the year-ago quarter.

Commenting on the quarter, the company’s CEO Charles Bachtell was quoted as saying that “As we all saw, there was a slowing of market growth in the fourth quarter and we were not immune to this.”

“The good news is our plan is working — consumers love our brands, we maintained our leadership as the No. 1 wholesaler of branded cannabis, and we were the most productive retailer in the industry,” he added.

The wholesale segment is critical for Cresco. It brought in $101 million in the fourth quarter, nearly 50% of total revenue for the period.

Too much red, not enough green

Marijuana stock investors have generally been stuck in the doldrums for some time now.

U.S. legalization, which will change the industry’s fortunes for the better at a stroke, is advancing haltingly at best. With a patchwork of markets to work with and a host of other challenges to face (a web of legal limitations, high taxation on product, lack of access to basic financial services, etc.), it’s very difficult for companies to turn a profit.

That’s why good news from pot companies, Cresco included, often gets obscured behind the red numbers on the bottom line.

And that’s a shame because there was more than a little to like with the company’s latest results. This includes the fact that cash flow from operations notched a new record ($38 million), and the end-of-year cash and equivalents pile was nearly $100 million higher year-over-year, at almost $224 million.

And thanks to its apparently incurable asset buying habit, Cresco’s dispensary count came close to doubling, standing at 46 at the end of December.

Crucially, this doesn’t include the big pack of dispensaries operated by the just-acquired Columbia Care. But that’s a subject for another story. At any rate, the end-2021 tally includes four stores in New York, a very strategic market that’s about to go live with recreational marijuana sales.

So Cresco bulls shouldn’t be disheartened by their fellow investors’ reaction on Wednesday. The company still has a strong position — made stronger by the Columbia Care deal — and it’s growing in crucial areas that matter. I still feel this is a weedie that’s going places.