Jushi Holdings JUSHF Executive Vice President Michael Perlman of Investor Relations is optimistic. In a quarter that was undeniably soft for U.S. cannabis operators, Michael believes there are plenty of strategic opportunities to grow the company as M&A activity heats up across the sector. With approximately $108.6 million of cash and cash equivalents on the balance sheet, the company is well-positioned to pick-up select accretive assets once the opportunity presents itself.

Jushi recently released Q4 2021 financial results which met expectations, although they re-affirmed that an industry-wide slowdown had taken place. The company did meet the 4-analyst estimate of $65.9 million, however, Beacon Securities was slashed its 2022 revenue and EBITDA expectations in the process. In lock step with management’s reduced guidance, Beacon analyst Russell Stanley lowered his revenue projection for 2022 from $409 million to $319 million while gross margin was revised down to 48% from the initial estimate of 56%. 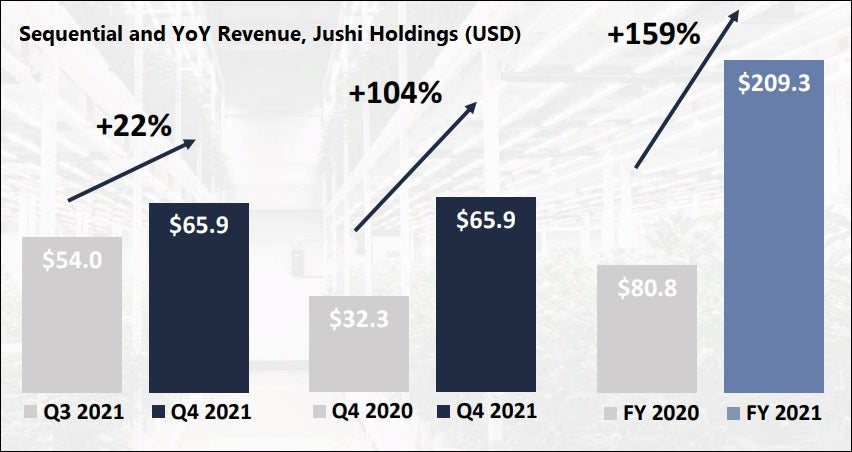 Nonetheless, the 104% increase in revenue from the $32.3 million generated in the fourth quarter of 2020 was nothing to complain about. The 22% sequential growth in revenue was still among the highest in the industry among Tier-1 MSOs, which leaves the company on a strong footing. The growth was primarily driven by the acquisition of Nature’s Remedy in Massachusetts, strong revenue growth at the Company’s BEYOND / HELLO stores in Virginia and Illinois, and increased wholesale activity in Pennsylvania and Virginia.

And if strong M&A activity persists in U.S. cannabis, Jushi Holdings could find additional opportunities to expand at a fair price. According to Michael Perlman, state limits on MSO dispensary limits, or ‘caps’, could force the acquiring operators to shed licenses to get under the cap in some states. It’s a situation that could very realistically come into play:

We have tremendous amounts of M&A opportunity in many of the markets that we’re in because there are limited license markets and some of the larger guys are already at max cap. So that presents a fantastic opportunity—an organic opportunity for us to grow.

While Q1 2022 could be equally challenging in the face of persistently-high consumer inflation and plunging consumer purchasing power, the pick-up in Jushi’s wholesale business could provide a boost by adding an additional revenue stream that was limited in 2021.

This article was originally published on The Dales Report and appears here with permission.