Cannabis stocks have taken a plunge so far this year. The AdvisorShares Pure Cannabis ETF is down 20.9% since the start of the year. Even the biggest pure-play U.S. cannabis companies, such as Trulieve Cannabis ( TCNNF 1.13% ), Curaleaf, and Cresco Labs, have seen their shares take a plunge, dropping more than 27%, 24%, and 10%, respectively, since the start of the year.

Investors may think now is the time to get out of cannabis stocks, but those falling share prices provide an opportunity to lock in a low share price before things eventually bounce back. The U.S. cannabis industry is worth around $60 billion and is projected to be worth $100 billion by 2030, according to a report by Business Insider.

The key, of course, is finding the right marijuana stocks. It isn’t that hard — look for the ones that are growing revenue and already making a profit, such as Verano Holdings ( VRNO.F 1.18% ) and Trulieve. 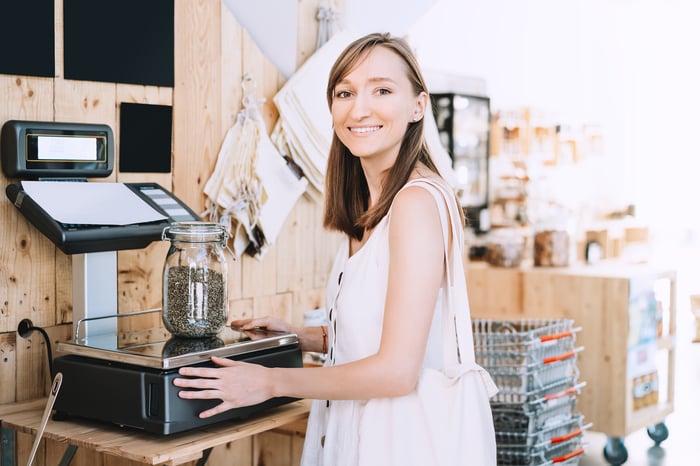 Verano Holdings is becoming bigger in the Northeast

Verano Holdings is in 15 states, with 112 operating retail locations, and soon will be in 18 states, with plans for more than 120 retail stores. The Chicago-based company took a big step last month when it announced it had plans to buy Goodness Growth Holdings for $413 million. The move gives Verano a big footprint in New York, plus an entryway into Minnesota and New Mexico (which opens for recreational cannabis sales on April 1).

The push into New York is especially important because the state has passed a bill allowing recreational sales and is expected to begin them sometime in 2023. The deal gives Verano one of 10 vertically integrated licenses to grow and dispense medical cannabis products in the state, four operating medical dispensaries, and the license to open up four more dispensaries, including three for recreational sales. With the Goodness Growth purchase, Verano is well settled in the Northeast, with operations in every state in the region except for Vermont, New Hampshire, and Maine.

Verano’s shares are down more than 18% so far this year and more than 48% over the past year. Those numbers belie how well the company, which just went public in 2021, is doing financially. In the most recent third quarter, the company reported revenue of $207 million, up 4% sequentially and 106% year over year (YOY). The company’s net income was $104 million in the quarter, up from $6.8 million sequentially.

This financial strength should allow Verano to absorb its new holdings while maintaining its high adjusted earnings before interest, taxes, depreciation and amortization (EBITDA) margin, which, as of the last quarter, was above 50%. The combination of lower share prices and higher income has driven the company’s forward price-to-earnings ratio (P/E) down to 13.17.

Trulieve is primed for growth

Trulieve made the biggest deal in cannabis last year when it purchased Arizona-based Harvest Health & Recreation for $2.1 billion. The deal wasn’t completed until October, so its impact will be more obvious this year.

Trulieve stock, as mentioned, is down more than 24% this year, but the rest of its numbers show why it is an industry leader.

The drop in the stock’s price has made it a more attractive investment, with a forward P/E of 17.13. 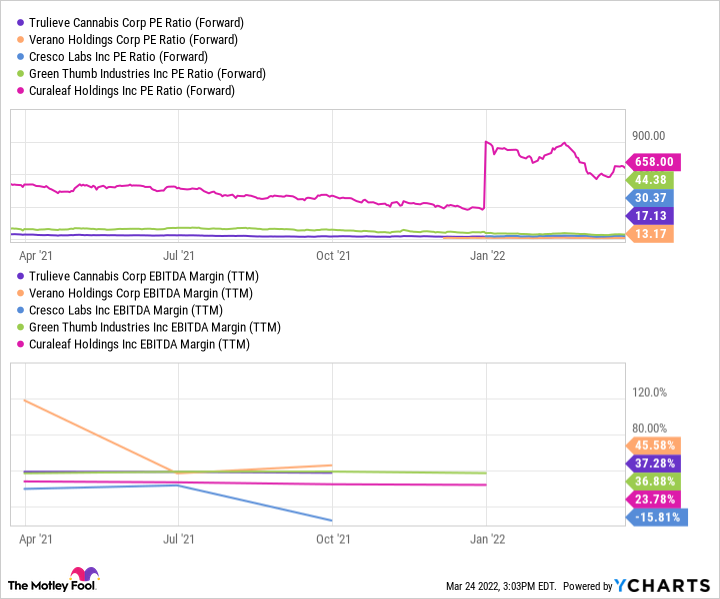 Trulieve and Verano Holdings continue to open new dispensaries and branch out into new states, but what I like most about these cannabis stocks is they have grown conservatively, keeping an eye on maintaining quality margins. Among the top pure-play U.S. cannabis stocks, the companies are No. 1 and No. 2 in EBITDA margin and lowest forward P/E.

This enables them to position themselves to be dominant players in the industry when opportunities present themselves. Instead of just growing revenue with the hopes of one day being profitable, these companies have used their profits to make the types of acquisitions that will allow them to continue to grow.

I like both stocks. If I had to choose right now, it would be Verano because of its lower forward P/E ratio and higher EBITDA margin. The key for both stocks, however, will be how well they are able to integrate their acquisitions over the next year.