Investing in the cannabis sector can seem risky these days, as the Horizons Marijuana Life Sciences ETF has plummeted more than 50% in just one year, while the S&P 500 has risen by 13%. No excitement on the legalization front and investors growing jittery amid the potential for several interest rate increases this year has sent them looking for shelter in safer, more value-oriented investments.

But if you’re willing to stick with the cannabis industry for the long haul, there could be some incredible opportunities to buy some promising stocks right now. Columbia Care (OTC:CCHWF), Cresco Labs (OTC:CRLBF), and GrowGeneration (NASDAQ:GRWG) are all trading near their 52-week lows. And these businesses could see much better days as the industry expands in the years ahead. 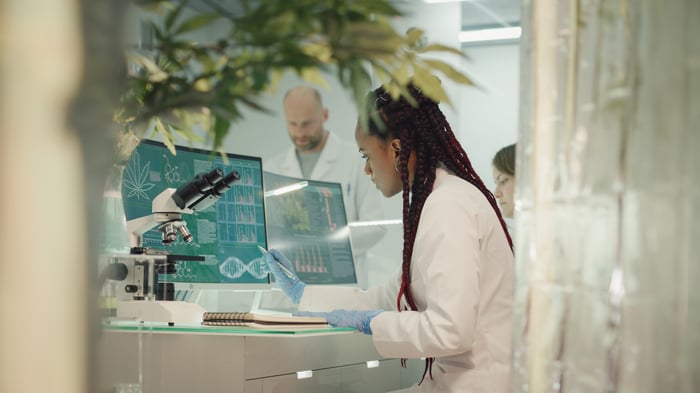 Multistate marijuana operator Columbia Care has 99 dispensaries across the country and is continuing to grow. In its most recent results, for the period ending Sept. 30, 2021, sales of $132.3 million were up 144% year over year, and its adjusted earnings before interest, taxes, depreciation and amortization (EBITDA) profit of $31 million meant its bottom line was an impressive 23% of sales.

The company has locations in two promising states that recently legalized recreational marijuana, New York and New Jersey, which could help position it for even more growth down the road.

What’s attractive about Columbia Care is that this is one of the more innovative pot stocks out there. In 2019, it launched its own credit card, which is unique in an illicit industry where customers often need to rely on making payments with cash. In April 2020, the early stages of the pandemic, it launched a virtual shopping experience where “on-site experts” would help customers shop from the convenience of their own home.

Innovative, growing, and profitable, Columbia Care makes for an underrated investment in the sector. At a price-to-sales (P/S) multiple of just over 2, it’s also slightly cheaper than more popular stocks like Curaleaf Holdings or Trulieve Cannabis, which trade at more than three times their revenue. At less than a dollar from its 52-week low, Columbia Care could be a solid pickup for investors.

Cresco Labs is a stock I’ve been a fan of for some time because it is growing while also keeping its bottom line strong. And that’s partly because the company is strategic in where it picks its spots to set up shop. A great example of that is its location near Wrigley Field, home of the Chicago Cubs. The company opened that location in November 2021, and with many baseball games and other events nearby, it has the potential to draw in lots of customers.

Being selective in where it opens dispensaries can help keep costs low while still tapping into a market’s growth potential. Cresco Labs has a relatively modest 48 retail locations across the country. By comparison, Trulieve has more than 110 locations just in Florida alone.

Cresco’s strategy has been working well for the business. In its third-quarter results (period ending Sept. 30, 2021), its revenue of $215.5 million was up 41% year over year. Its adjusted EBITDA profit totaled $56.4 million, for a margin of more than 26%.

Like Columbia Care, Cresco also isn’t far from its 52-week low. And its P/S ratio is barely above 2, trading at even less of a premium.

GrowGeneration is the only company on this list that isn’t a pot producer. Instead, it’s in the business of helping producers cultivate cannabis. It says it’s “where the pros go to grow,” selling grow lights, tents, water pumps, and many other related things growers require. While cannabis isn’t the only thing its products can help grow, the industry has been a significant part of its growth story.

The company released its fourth-quarter earnings earlier this month, reporting that sales of $90.6 million for the last three months of the year grew by 46% from the prior-year period. Adjusted EBITDA just missed breakeven, with a loss of $1.9 million in Q4.

Investors may be uninspired about the company’s projections for 2022, which include a sales forecast where the top line will be between $415 million and $445 million, meaning that it could potentially be lower than the $422.5 million GrowGeneration reported in all of 2021. However, the company notes that its guidance doesn’t include unannounced acquisitions, suggesting that those numbers could finish higher.

The positive is that the company is focused on improving its bottom line. CEO Darren Lampert says, “We have made several strategic decisions to drive margin improvements and EBITDA.” In 2022, management forecasts that adjusted EBITDA will be within $30 million and $35 million, comparable to the $34.5 million profit it reported this past year.

While investors may be down on these projections, it’s important to remember this is just one year and comes at a time when there are oversupply issues; that’s especially true in California, where pot prices for some growers have cratered by more than 80% due to too much production. Lampert alluded to such challenges in the earnings release, stating that his company “delivered a strong year despite the persistently difficult macro environment that is impacting the entire cannabis industry.”

GrowGeneration is facing some headwinds, but as the industry normalizes and with more states potentially legalizing marijuana in the future, there will still be plenty of growth opportunities ahead for the company. For example, New Jersey’s recreational pot market is just about ready to open for business, while adult-use sales may not commence in New York until 2024.

Although GrowGeneration’s 84% decline in one year is troubling, the one thing I never liked about the stock was its hefty valuation, as it was largely overpriced to begin with; its P/S ratio has gone from more than 12 a year ago to now being at just over 1. At a lower multiple of revenue, GrowGeneration isn’t nearly as risky a buy as it was earlier. And the business’ fundamentals are encouraging, with the company remaining profitable on an adjusted EBITDA basis while still pursuing growth opportunities.