Two of investors’ all-time favorite cannabis companies released quarterly results last week. Canada-based Aurora Cannabis ( ACB -5.71% ) and Canopy Growth ( CGC -5.52% ) have made investors rich in the past. Both had an early mover advantage in the Canadian medical cannabis market. However, the last couple of years have been a roller-coaster ride. Besides some of their own mistakes, external headwinds like regulatory challenges in Canada delayed the opening of legal stores, which slowed down growth for these cannabis specialists.

Both companies have been attempting to rebound through various cost-cutting strategies, but they don’t appear to be working so well. Aurora Cannabis and Canapy Growth repeatedly missed achieving earnings before interest, tax, depreciation, and amortization (EBITDA) targets last year. Let’s take a look at their recent quarterly results and determine which of these pot stocks is a better buy in 2022. 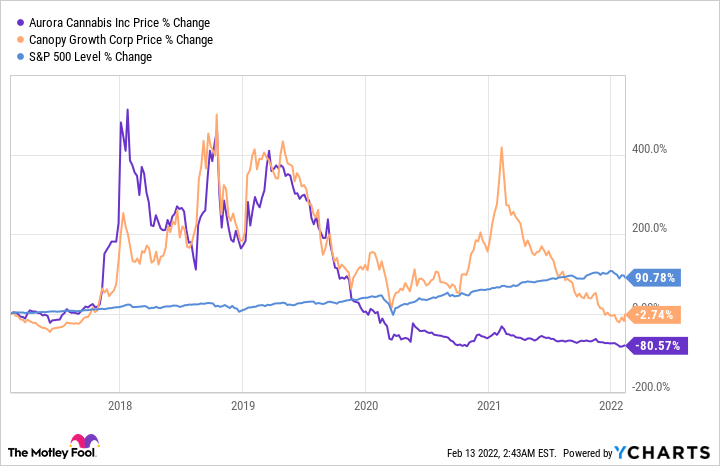 Despite all of its cost-cutting strategies, Aurora has failed to achieve its EBITDA targets numerous times since last year. Its recent second-quarter fiscal 2022 results weren’t a sight for sore eyes, either. Total net revenue declined 10% year over year to 60 million Canadian dollars. While medical cannabis revenue saw an 18% increase from the year-ago period, consumer cannabis revenue plunged 48% to $14 million from the year-ago period. The slump was a result of Aurora’s lack of development in recreational cannabis products. However, management said it was “introducing a new range of products set to launch this spring” in the recreational segment. It will be interesting if these new products can help revive Aurora’s revenue.

Even though Aurora managed to reduce its adjusted EBITDA losses to CA$9 million from CA$11 million in Q2 fiscal 2021, it is another quarter of losses. Management believes the company will be able to hit the upper end of the cost savings range of CA$60 to CA$80 million by the first half of 2023, thus achieving EBITDA profitability by then as well. But it is hard for investors to put faith in a company that has been consistently failing to keep its promises.

Canopy Growth could do better to rebound

Canopy saw a decline in net revenue yet again in the third quarter ended Dec. 31, 2021. According to management, a slump in Canadian cannabis sales caused an 8% drop in net revenue to CA$141 million for the period.

Canopy saw a 19% increase in its consumer products revenue to CA$58 million, most of which stemmed from its acquired businesses like Storz & Bickel, This Works, Bio Steel, and other U.S. CBD businesses. It is sad to see that despite having an early mover advantage, the company saw its Canadian medical cannabis revenue fall 21% year over year to CA$61 million. Canopy also was the first to launch a variety of high-margin derivatives after Canada legalized them — still, its recreational cannabis revenue fell 25% from the year-ago period.

As a result, Canopy recorded an adjusted EBITDA loss of CA$67 million. Despite the losses, the company ended the quarter with cash and short-term investments of CA$1.4 billion, thanks to backing from Constellation Brands. 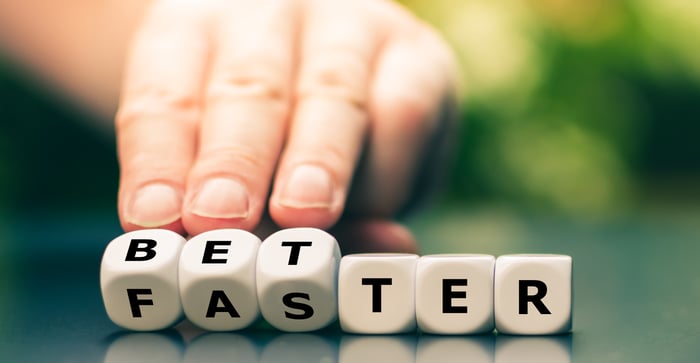 Which is the better choice?

Both Aurora Cannabis and Canopy Growth are eager to enter the U.S. market. It is understandable why these companies are eyeing the U.S. market, as it is a much bigger and better opportunity than Canada. Even without federal legalization, the domestic growers are close to generating $1 billion in revenue (for 2021) just from the limited state markets. However, I believe until both companies achieve profitability from the Canadian market, it will be challenging to expand in the U.S.

While Canopy made no forecast of when it will hit positive EBITDA, Aurora again assured investors of doing so by the first half of 2023.

Wall Street analysts have hopes for both Canopy and Aurora shares this year; they see upsides of 39% and 43% respectively, for the next 12 months. I believe Canopy is the better marijuana stock to buy now. While Aurora’s future looks bleak, prospects look better for Canopy in the U.S. a few years down the line. It has a portfolio of innovative products and some strong partners to establish a footprint in the U.S. market. But that could take a while. Investors who have the patience and the stomach to bear the risk can buy and hold Canopy for the long haul.