Investors in AT&T (NYSE: T) are likely down on the news that they will be collecting less in dividends from the telecom giant. An adjustment, however, wasn’t a surprise given that the company was spinning off WarnerMedia and hinted last year that it would need to “resize” its dividend.

However, there are arguably better dividend stocks out there than AT&T. Two high-yielding ones that investors might want to pivot to instead are Innovative Industrial Properties (NYSE: IIPR) and AbbVie (NYSE: ABBV). Over the past three years, their total returns (including dividends) have eclipsed those from AT&T: 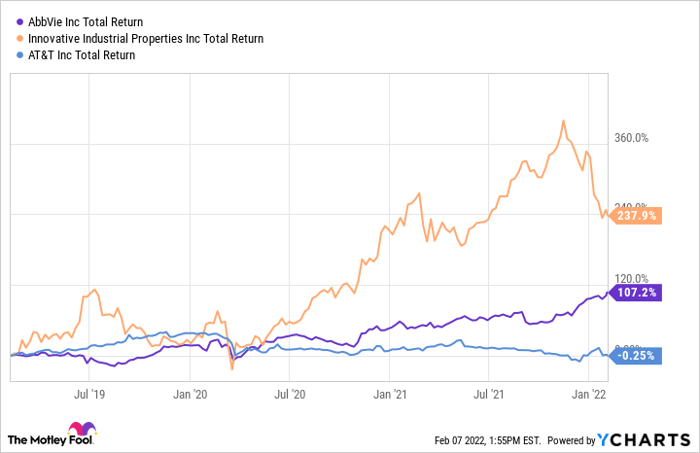 Innovative Industrial Properties (IIP) is a relatively new kid on the block in terms of dividends. That’s because the stock only went public back in late 2016. But since then, the cannabis-focused real estate investment trust (REIT) has been on a tear, not only growing its revenue but also significantly raising its dividend income along the way.

Today, its quarterly dividend payment of $1.50 yields 3.1%, which is more than double the S&P 500 average of 1.3%. And early investors are collecting much more on their initial investments. When the company started paying dividends in 2017, it paid just $0.15 per quarter.

The business doesn’t wait a whole year to raise its payouts, either. The longest that investors have had the same payout was three quarters in a row; IIP normally makes multiple hikes a year. The $1.50 payment it is making now is 21% higher than the $1.24 it was paying just a year earlier.

And the business itself is growing. As more marijuana companies look for space to rent or raise cash through sale-and-leaseback agreements, IIP will continue to find ways to expand. In the last three quarters, revenue of $145.6 million has nearly doubled from the $79.8 million it reported over the same period a year earlier. And its funds from operations for the three-month period ending Sept. 30, 2021, of $1.70 per share are sufficient to cover its dividend. But with more growth still likely on the horizon, it’s likely that IIP’s earnings, along with its dividend payments, will continue to rise.

Investors in IIP get not just a good dividend stock, but also a fast-growing one that can deliver superior returns, unlike AT&T. 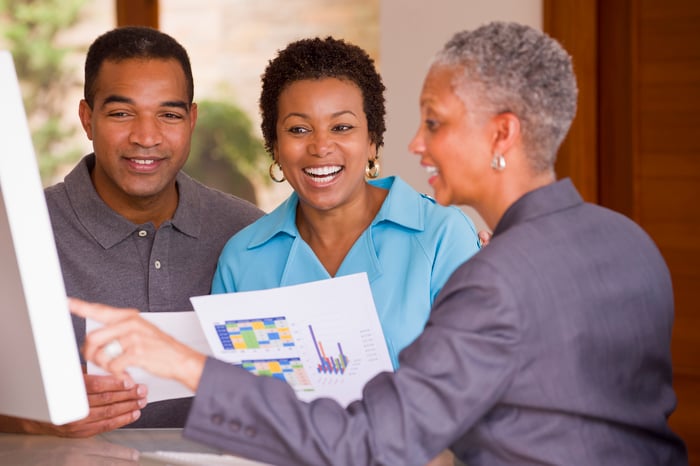 Drugmaker AbbVie pays a higher yield than IIP today at just over 4%. Admittedly, its growth isn’t nearly as impressive. However, AbbVie is a Dividend King and has an impressive track record for raising its dividend payments. Its most recent hike was an 8.5% increase from $1.30 to $1.41 per quarter.

The company is also coming off a strong quarterly result for the period ending Dec. 31, 2021, during which sales of $14.9 billion grew by 7.4% year over year. Revenue from many of its top products rose at rates of more than 30%, including those it acquired from Botox-maker Allergan in 2020.

And there is likely more growth ahead as the company anticipates $24 billion in adjusted free cash flow this year, with $2 billion of that going toward strengthening its pipeline. This year, AbbVie expects to generate diluted per-share earnings between $9.26 and $9.46, which would put its payout ratio at 60%, leaving plenty of room for more rate hikes.

With AbbVie, investors are getting a solid investment that in the past year generated a profit margin of 20% and is likely to remain a top growth stock to own for the foreseeable future. Its impressive high-yielding dividend just makes it an even better buy, and a more well-rounded investment than AT&T.