I had been on a wait list to purchase my very first non-fungible token (NFT). The wait list was randomized, so I didn’t know when or if my number would be called. And as the people ahead of me in line snapped them up, I experienced a surprising jolt of adrenaline and anxiety. But once the final NFT from the collection was purchased, I started calming back down, assuming I missed out. I felt my heart rate slowly coming back down to normal.

I assumed wrong. Checking my email later that day, the adrenaline came rushing right back. The launchpad where I bought my NFT allowed people to prefund their accounts, automatically purchasing a NFT if your number got called. I had taken advantage of this feature, so that’s how the purchase went through without me knowing it.

Let me explain why I’m scared of the NFT space as I reflect on my emotionally charged experience. If you want to buy a NFT, I believe it’s crucial to have a healthy dose of self-awareness to prevent you from falling headfirst down a dangerous hole. 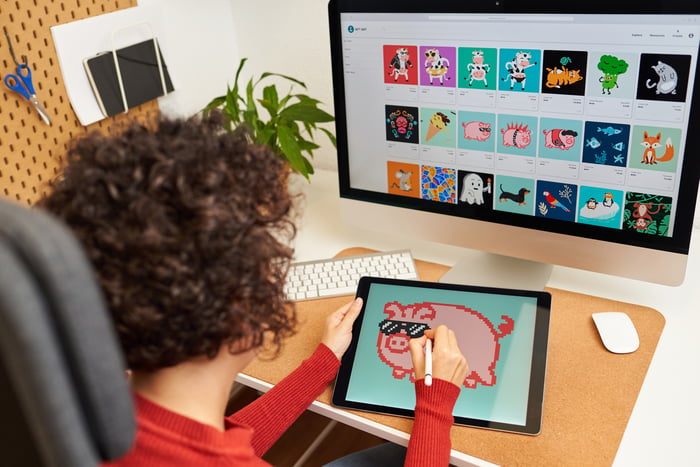 Why I bought an NFT in the first place

Simply put, a NFT is digital property with verifiable ownership. Often this is an image, but it could be other things, like trading cards, music, and more.

And I won’t beat around the bush: I became curious about NFTs because I’ve seen people make money in the space — in some cases, a lot of money.

The most extreme example is the Bored Ape Yacht Club. You could have purchased one of these images new in April 2021 for 0.08 Ether, the native token of the Ethereum blockchain. As of this writing, the cheapest Bored Ape for sale is 97 Ether (roughly $300,000) — a 1,200-bagger in under a year.

Finding a NFT project that enjoys even just a fraction of the Bored Ape Yacht Club’s success could result in a 100-bagger — a life-changing-caliber investment. It might sound shallow. But let’s be honest: You probably wouldn’t be reading this article if there weren’t money in NFTs.

That said, I’m not naive enough to believe that all NFT projects will have the same potential — they don’t.

Therefore, I began my journey with cautious curiosity. I found a NFT project that looked differentiated enough to have potential. But it was one that I wouldn’t feel terrible if the value plummeted and I was stuck with the picture I bought. Moreover, it was cheap enough to dip my toes in the water but expensive enough to teach me a financial lesson if needed.

After spending time in online NFT communities, I’m convinced most people are simply trying to get rich quickly. This is reflected by the oft-repeated motto of NFT investors, WAGMI — “we’re all gonna make it.”

Most people are approaching NFT as a trade. And a trade is intrinsically short term and based on greater fool theory — simply trying to offload something onto someone else for a higher price. The way many traders do it, it’s not much different than a pump-and-dump scheme. NFT projects are hyped on social media until the floor price rises significantly and early buyers cash out.

However, I found the entire process of buying my first NFT to be exhilarating. Adrenaline and dopamine were flowing freely as I imagined the possibility of lightning-fast profits. This short-term mindset is dangerous and can cause people to abandon sound financial decision-making, myself included.

Investing great Charlie Munger said, “If you take the modern world where people are trying to teach you how to come in and trade actively in stocks, well, I regard that as roughly the equivalent to trying to induce a bunch of young people to start off on heroin.”

Illicit drugs both impair judgment and create addictions. I believe investors would be wise to heed Munger’s warning here when it comes to trading anything, including NFTs.

Don’t misunderstand: Some NFT projects have A-list creators with detailed roadmaps, creating communities committed to holding their NFTs for the long term. And the NFT space may scare me, but that doesn’t mean I’m avoiding it — I’ve since purchased my second NFT.

I’m simply advocating for a healthy investing mindset. Nothing can derail your investing journey faster than nurturing bad investing behavior. As Munger also says, “It is remarkable how much long-term advantage people like us have gotten by trying to be consistently not stupid, instead of trying to be very intelligent.”

Left unchecked, buying NFTs can induce feelings that motivate bad investing behavior. If you’re buying a NFT, it’s important to have a good, established investing mentality and a healthy dose of self-awareness to make sure you’re, as Munger put it, “consistently not stupid.”