Scotts Miracle-Gro (NYSE:SMG) has had a hard 12 months, with its shares down more than $100 from a year ago.

The gardening supply company with a connection to the cannabis market released its fiscal 2022 first-quarter report on Feb. 1. The news wasn’t great, but thanks to a heads-up release by Scotts in January, it was hardly unexpected.

Part of the problem for the company is that it did so well early in the pandemic, when housebound workers began to focus more on gardening, that the company’s most recent numbers now look pale in comparison. The red flag: Its sales are falling

In January, the company said it anticipated as much as a 40% decline in the quarter, thanks to a slowdown in cannabis sales brought on by a glut of marijuana grown in state-authorized markets that led to a decline in commercial cannabis cultivation, as well as supply chain issues.

The company’s wholly owned subsidiary, Hawthorne Gardening Company, which makes indoor and hydroponic products used in cannabis growing, reported first-quarter sales of $190.6 million, down 38% year over year. The results, representing the second consecutive quarter of declining sales for Hawthorne, were concerning enough that the company announced it plans to spend $5 million in the second quarter to restructure the subsidiary to save costs, including trimming 200 jobs and consolidating its lighting manufacturing to one location in Santa Rosa, California.

The worry is that if the glut in cannabis doesn’t ease anytime soon, the company’s revenue could fall again and it will take a while for its cost-saving measures to help margins. Some investors see the stock as a pandemic play that has run its course.

Investors don’t like things being unsettled, and the company’s recent musing about possibly spinning off Hawthorne hasn’t helped the stock’s price, which is down more than 43% over the past year.

In the company’s first-quarter earnings call, Scotts CEO Jim Hagedorn said the company is considering a spinoff while possibly maintaining a minority position in Hawthorne.

“We’ll create the most valuable pure cannabis play in the world,” Hagedorn said. “The value creation of creating an entity that we’re talking about here more than offsets the relatively minor dis-synergies that would happen.”

The green flag: It has become a bargain

Even with its recent problems, the company has had six consecutive years of increased revenue. Scotts Miracle-Gro is looking to trim costs and make Hawthorne more profitable. And should marijuana growing increase, the company is poised to improve its margins. On top of that, the CEO said in the first-quarter earnings call that Scotts has raised its yearly sales guidance for its U.S. consumer business from minus 2% to plus 2%.

The price slump has turned the stock into a good deal, with a price-to-earnings (P/E) ratio of 17.88 and a forward P/E of 16.17. That is more than competitive with any cannabis or cannabis-related stock on the market. The turn away from companies that were considered pandemic plays might have swung a little too hard for Scotts considering that it is still a profitable company with margins usually above 21%.

It could take a while for the company’s revenue to bounce back. Hawthorne division president Chris Hagedorn said he expects to see increased sales in the second half of the year after a slight decrease in the second quarter. In the meantime, the company rewards patient investors with a quarterly dividend, which it raised by 6.4% last year to $0.66, the 12th consecutive year it has increased its dividend. At its current price, the yield is 1.94%. 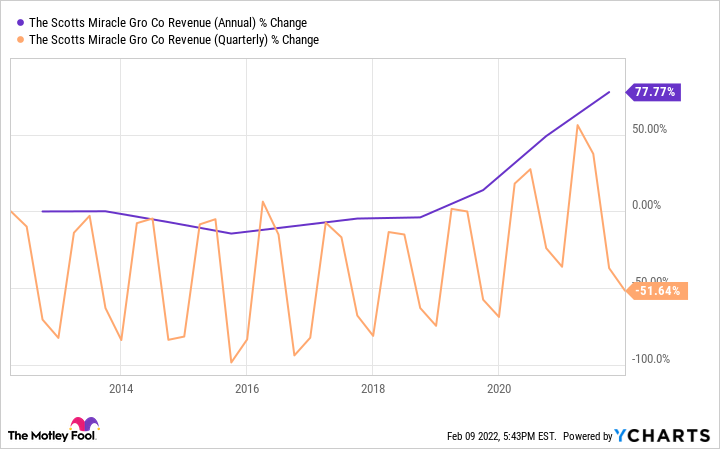 Giving it a long-term look

If you look at the chart above, you’ll see the company’s revenue has always been cyclical as its sales soar during the spring and summer planting season, then often go dormant in the fall and winter. So there’s no need to panic regarding its first-quarter sales decline.

Scotts Miracle-Gro remains a good long-term stock for investors. To begin with, the company is managed with the long view because 25% of its stock is owned by the family of CEO Jim Hagedorn, and family members are represented throughout the company. The seeds of a rebirth in gardening were planted during the pandemic, and though supply disruptions and inflation have cut into Scott’s short-term numbers, there’s plenty of likelihood for continued growth.

If Scotts continues with its Hawthorne division, there’s obviously growth there, too, as more states legalize marijuana.