Anytime there’s a steep sell-off in the stock market it creates some buying opportunities. The challenge can be sorting out which stocks are likely to continue falling versus those that are likely to bounce back. But if you’re looking at the long term, it may not be difficult to find some promising gems out there.

Last month, the S&P 500 had its worst month since the start of the pandemic, falling by more than 5%. Trulieve Cannabis (OTC:TCNNF), Western Digital (NASDAQ:WDC), and Upstart Holdings (NASDAQ:UPST) performed even worse, declining by more than 20%. Here’s why, despite their rough starts to the year, they could make for terrific buys today. 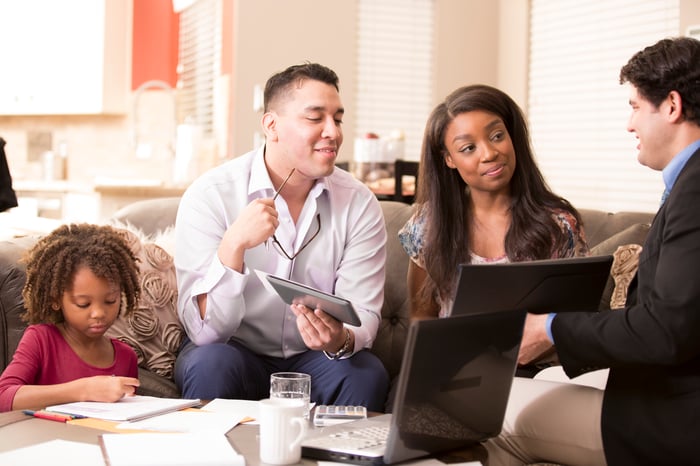 Shares of pot producer Trulieve Cannabis sank 24% in January. The decline sent the stock to lows not seen since October 2020. A big reason why the stock looks to be a solid buy right now, however, is that it and rival Curaleaf Holdings are the top companies in the cannabis industry.

Last year, Trulieve acquired Arizona-based producer Harvest Health & Recreation, and together, for the three-month period ending Sept. 30, 2021, they combined for revenue of $316 million and an adjusted earnings before interest, taxes, depreciation and amortization (EBITDA) profit of $121 million. Curaleaf, by comparison, reported sales of just over $317 million for the same period, but its adjusted EBITDA was much lower at $71 million.

Curaleaf trades at a higher premium, with a price-to-sales multiple of 4.6 versus just 3.6 for Trulieve. It’s a modest difference, but you could argue that a stronger bottom line from Trulieve should garner a better multiple. The business is now more diverse with Harvest Health in the mix, and better earnings could set the company up for more acquisitions to take advantage of the fast-growing cannabis industry. Analysts from Markets and Markets expect the industry as a whole will grow at a compounded annual growth rate (CAGR) of 28% until 2026, when it may be worth more than $90 billion globally.

Trulieve is a promising stock to own after an abysmal January, and could be a diamond in the rough for investors willing to buy and hold.

Western Digital stock had a slightly better January than Trulieve, but it too fell by a relatively steep 21%. It’s a surprising performance given that the company’s second-quarter earnings, which it released on Jan. 27, looked strong. Sales of $4.8 billion for the period ending Dec. 31, 2021 were up 23% year-over-year, and its cloud business generated revenue growth of 89%. The company notes that it achieved this while dealing with supply chain disruptions.

The future is undoubtedly in the cloud, and Western Digital and its portable drives and technology make it easy for people to work from home and businesses to digitize their operations. The market for global digital transformation, which includes utilizing more connected devices, will grow at a CAGR of 23.6% until 2028, according to estimates from Grand View Research.

Western Digital’s stock trades at a modest forward price-to-earnings ratio of just 6.3 — nearly half the size of rival Seagate, where investors are paying more than 12 times its future profits. Several brokerages project that Western Digital could rise to more than $70 per share, which would be at least a 35% increase in value from the $52 it trades at today.

Upstart Holdings crashed by 28% last month, performing the worst of the stocks on this list. However, it’s also the fastest-growing; in its most recently released quarterly results for the period ending Sept. 30, 2021, the company’s sales of $228 million rose by 250% from the prior-year period. The company, which looks to revolutionize the lending business through its artificial intelligence platform and utilization of 1,000+ data points to assess creditworthiness, is a disruptor in the financial services industry, with the potential to generate significant returns in the long run.

What impresses me the most about the business is that, in addition to some incredible growth numbers, Upstart also generates impressive margins. Over its past three quarters, the company has generated an operating profit of $80.5 million, or 15% of its total sales of $543.7 million. With a relatively young company (it went public in December 2020), investors normally expect growth but not a whole lot in terms of profitability. And yet Upstart has posted a profit in each of its last four quarters, averaging a profit margin of more than 12% in the trailing 12 months.

It isn’t a cheap stock by any stretch, trading at more than 43 times its future earnings (investors are paying a multiple of 27 for popular fintech stock PayPal), but that number will come down if Upstart can keep building off this impressive growth. At a share price of just $100, many analysts see the stock not just doubling but potentially even tripling in value from where it is right now.