No one knows how long cryptocurrency’s current slump will last. But the industry’s long-term prospects look promising, with geopolitical uncertainty on the rise and inflation eroding the value of fiat currencies. Investors looking to get into crypto should bet on those tokens with the best chance of outperforming when the market recovers.

Metaverse token The Sandbox (CRYPTO: SAND) fits the bill — and it’s my top cryptocurrency to buy in February.

The metaverse is a huge opportunity

While the concept is far from fully developed, the metaverse could be defined as a vast array of interconnected virtual worlds that continue existing and operating regardless of who is or is not accessing them. Some will likely be best experienced via virtual- or augmented-reality gear, but that won’t necessarily be required.

Analysts at Emergen Research expect that as more companies invest in this exciting new medium, the metaverse market opportunity will expand at a compound annual rate of 43.3% through 2028 to $829 billion. 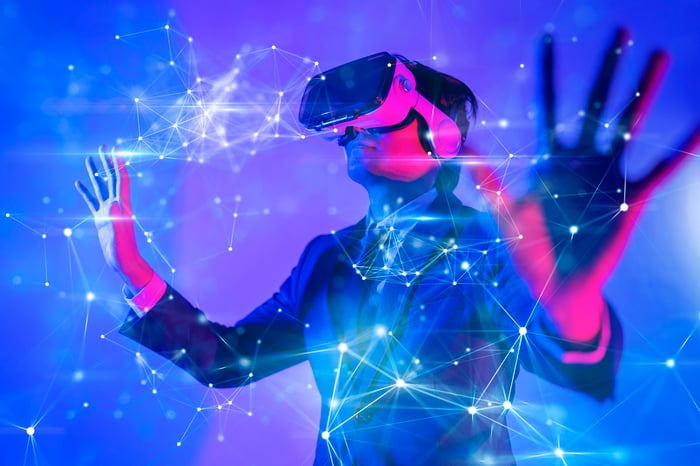 There are two main reasons blockchain platforms are well-suited to metaverse development. First, their native tokens (the units used to pay fees and make transactions on specific networks) can double as in-application virtual currencies. Second, non-fungible-tokens (NFTs), which are unique assets that can’t be replicated, serve as digital proofs of ownership. Together, these technologies can form the backbone of a decentralized virtual economy.

The Sandbox has a compelling strategy

The Sandbox is fully committed to this opportunity. According to its white paper, it aims to create interconnected virtual worlds where users can “build, own and monetize gaming experiences” — a similar business model to that of publicly traded video game platform operator Roblox.

The Sandbox’s content ecosystem is made up of three synergistic products. First is the Voxel Editor, a 3D-modeling program that allows users to create in-game objects. The second is the online marketplace where users can buy and sell such objects. And third is the Game Maker, a game creation engine that allows users to locate and use their objects within a specific piece of in-game virtual real estate.

Developers are putting in the work

According to its official roadmap, the Sandbox began public sales of virtual real estate in 2020. And it boasted 30,000 monthly active users in its beta, according to a Nov. 2 tweet. This quarter, developers plan to open their segment of the metaverse to owners who have built high-quality experiences on their digital real estate.

The Sandbox has also partnered with Warner Music Group to launch a metaverse concert hall designed to host virtual performances.

The Sandbox is not the only blockchain platform getting serious about metaverse development. The developers behind popular meme coin Shiba Inu are working on a project called Shiberse that’s expected to launch in 2022 — although details about it have been scarce.

The Sandbox stands out from the competition because of the impressive progress it has made toward making its metaverse a reality. Its developers also have solid experience in game creation: The Sandbox Franchise of mobile games boasts 50 million installs on iOS and Android devices, so this isn’t a fly-by-night operation. Trust and a track record of success are important in the largely unregulated cryptocurrency industry.

With a market cap of $3.4 billion, The Sandbox’s valuation has soared roughly 7,000% since its inception in late 2020. And while the platform is not immune from the current cryptocurrency bear market, its experienced development team and unique value proposition (as a decentralize user-generated metaverse game) can help it outperform peers when the industry recovers.

10 stocks we like better than Shiba Inu
When our award-winning analyst team has a stock tip, it can pay to listen. After all, the newsletter they have run for over a decade, Motley Fool Stock Advisor, has tripled the market.*

They just revealed what they believe are the ten best stocks for investors to buy right now… and Shiba Inu wasn’t one of them! That’s right — they think these 10 stocks are even better buys.