This could be a breakout year for cannabis stocks. In particular, U.S.-based pot stocks could be in store for great things with the potential for major cannabis reform in Washington, D.C.

As always, some stocks will perform better than others. Here are three cannabis stocks that are especially poised to skyrocket in 2021. 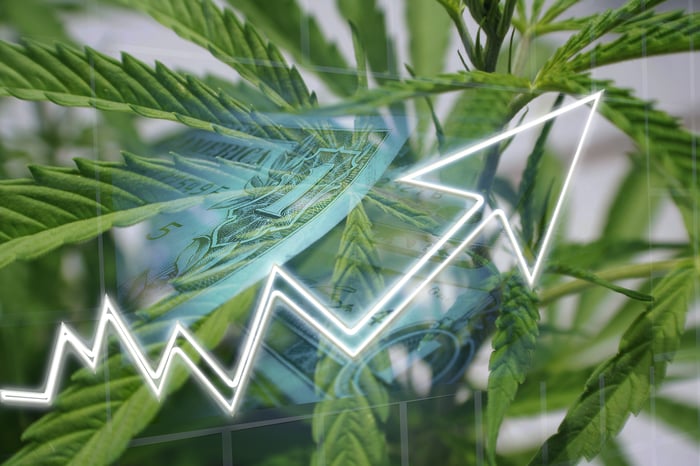 Multistate cannabis operator Cresco Labs (OTC:CRLBF) delivered a strong performance in 2020, with its shares rising 44%; it has nearly reached that level so far this year with a gain of 33%. I look for even better days ahead for Cresco.

The cannabis markets in the nine states where the company already operates continue to grow. Even California, which has one of the most mature markets in the U.S., is seeing strong retail sales increases. Cresco isn’t standing still in these states, though. For example, the company recently acquired Verdant Creations’ four dispensaries in Ohio.

Another reason Cresco is well positioned to deliver tremendous returns is its valuation. No, it’s not what anyone would call a value stock. But its market cap is well below several of its peers that generate similar revenue.

Green Thumb Industries (OTC:GTBIF) stands out as another multistate operator that crushed it last year as its stock soared over 150%. That momentum has rolled over into 2021 as well, with Green Thumb’s shares up more than 30% year to date.

Like Cresco, Green Thumb has significant growth prospects in states where it already operates. The company has 52 stores across 12 states. But it owns a total of 97 retail licenses.

There’s an even bigger opportunity for Green Thumb in new markets. In particular, New Jersey recently passed a law to legalize recreational marijuana. It already has a medical cannabis dispensary in the state, with another on the way. CEO Ben Kovler said in November that he thinks the New Jersey market “has the potential to mirror Illinois,” referring to his company’s home state, which now claims a massive and fast-growing cannabis market.

The company also should be able to grow by introducing new products. A good example is Green Thumb’s recent partnership with Cann, a maker of cannabis-infused beverages. The two companies plan to distribute cannabis-infused sparkling beverages in Illinois initially, then expand into additional markets including New Jersey.

Jushi Holdings (OTC:JUSHF) was the biggest winner of these three U.S. cannabis stocks in 2020 with a sizzling gain of 325%. So far this year, shares are only up around 6%. But don’t rule out the possibility that Jushi will again deliver a triple-digit return by the end of 2021.

The company continues to build its presence in the four states where it already has operations. Jushi recently opened its fourth retail store in Illinois, bringing its total nationwide count to 16 stores. It’s also acquiring an operational retail cannabis store in California and buying another retail license holder in the state.

Jushi’s valuation looks downright cheap compared to most other cannabis stocks. Its shares trade at around 11.5 times sales, below nearly all of its peers. And its impressive growth (67% higher revenue in the third quarter compared to the previous quarter) makes that valuation seem even more attractive.

Marijuana legalization in additional states opens up more growth opportunities for Jushi. And should major cannabis reform be enacted at the federal level in the U.S., Jushi — along with Cresco Labs and Green Thumb — should really take off.