Cannabis stocks are on the move Tuesday morning, thanks to one company’s financial update. Shares of OrganiGram Holdings (NASDAQ:OGI) lead the way, having gained as much as 18% early today. The stocks of fellow Canadian growers Canopy Growth (NASDAQ:CGC) and HEXO (NASDAQ:HEXO) moved as much as 5% higher in sympathy. As of 10:20 a.m. EDT, OrganiGram shares were still up 13.2%, while shares of Canopy Growth and HEXO were each up about 2.5%.

The catalyst for today’s moves was OrganiGram’s fiscal third-quarter 2021 financial results. The company announced that net sales had grown 39% sequentially over the previous fiscal second quarter and 13% compared to the prior-year period. Revenue growth was aided by adult use recreational marijuana sales, which jumped 40% sequentially and 10% year over year. 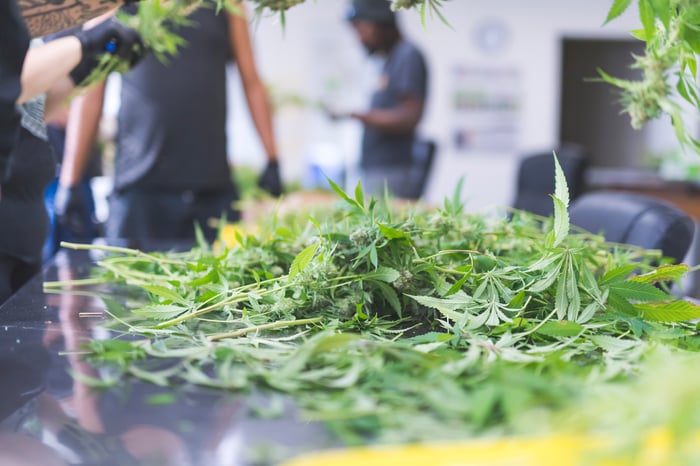 Several Canadian cannabis companies have been struggling to grow as pandemic restrictions continued to impact business into 2021. Last month, HEXO reported net sales had grown only 2% year over year for its quarterly period ended April 30, 2021. Its net loss for the period had expanded over 2020. HEXO CEO Sebastien St-Louis said it had been a “challenging quarter,” though he said the company navigated it well “despite the impact of the COVID-19 third wave in Ontario during the period, in which most private retailers were limited to curb side pickup only.”

Canopy Growth had a somewhat better time during its fiscal fourth quarter ended March 31, 2021. Its net revenue jumped 38% over the comparable prior-year period; it said its 19% share of the Canadian recreational flower market kept it at the top position for market share. But Canopy also reported a net loss for both the quarter and the full fiscal year, though it narrowed the losses in both periods compared to the prior-year periods.

But today’s results from OrganiGram Holdings brought more optimism among the entire sector. Paolo De Luca, the company’s chief strategy officer, said in a statement, “Sales are trending higher to date in Q4 supported by a strong outlook for the industry as the number of cannabis retail stores continues to grow and existing stores are permitted to reopen their doors to customers.”

That’s good news for the industry in Canada, and investors are reacting accordingly today.