A theme is emerging among Canadian cannabis companies and their plans for growth. Today, Canopy Growth (NASDAQ:CGC) announced a new acquisition agreement that has it following a similar strategy as other Canadian growers like Tilray (NASDAQ:TLRY). That news is among the reasons several peer companies are seeing shares jump today. As of 1:20 p.m. EDT, shares of these names, as well as Sundial Growers (NASDAQ:SNDL) and OrganiGram Holdings (NASDAQ:OGI), were moving as follows:

Today, Canopy Growth announced an agreement for the right to acquire Colorado-based Wana Brands, the top edibles brand in North America. The combination will occur upon federal marijuana legalization in the U.S. The plan is similar to a deal Tilray announced in August to potentially control another American cannabis retailer. 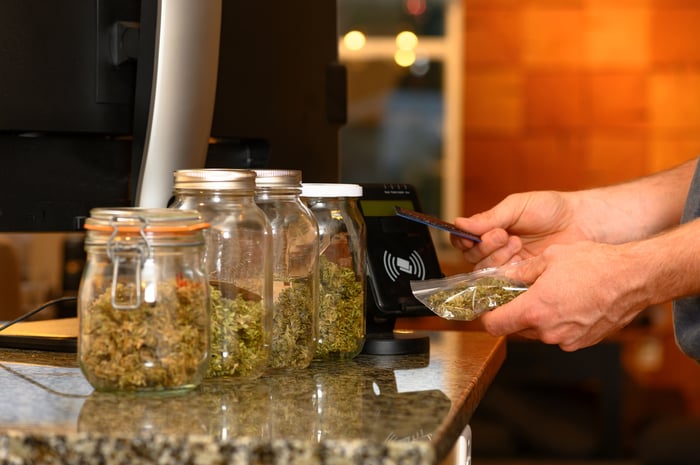 In August, Tilray acquired a majority position in the outstanding senior secured convertible notes of U.S.-based cannabis retailer MedMen Enterprises. This allows Tilray to potentially own a significant equity stake in MedMen. At the time of that announcement, Tilray CEO Irwin Simon said the move “is a critical step toward delivering on our objective as we work to enable Tilray to lead the U.S. market when legalization allows.”

Similarly, with today’s announcement, Canopy Growth CEO David Klein said in a statement, “The right to acquire Wana secures another major, direct pathway into the U.S. THC market upon federal permissibility.” Canopy will also be adding a company with the top market share of the Canadian edible gummy market.

But the clear intention of the agreement is to add a pathway to the U.S. market. Tilray has taken that route with more than just its position in MedMen. It also acquired craft brewer SweetWater Brewing last year and is expanding and integrating its product offerings. But the true value from SweetWater would come from its distribution infrastructure upon U.S. legalization.

Sundial Growers has also been expanding through acquisitions and investments. But it has so far made those investments in Canadian companies. The Canadian market has slowed due to pandemic-related closures and restrictions. But even so, last week Tilray said in its fiscal 2022 first quarter ended Aug. 31, it increased net revenue 43% compared to the prior-year period.

But investors should continue to consider these names speculative. Much effort is going toward accessing a potentially legal U.S. market. But federal legalization remains uncertain as does any time frame should it actually occur.