To double your investment with marijuana stocks, one needs a strong appetite for risk and lots of patience. The industry is still in its nascent stage and sees ups and downs, and the drug is still illegal federally in the U.S. But even with a limited legal market, these three cannabis multi-state operators (MSO) are performing exceptionally well.

New York-based Columbia Care (OTC:CCHWF), Colorado-based GrowGeneration (NASDAQ:GRWG), and Illinois-based Cresco Labs (OTC:CRLBF) are smaller in size but have the potential to shine as the industry expands. If you have $1,500 spare money left after paying all your bills, let me tell you why these three growth stocks are your best bet to invest in now and grow your money in the long run. 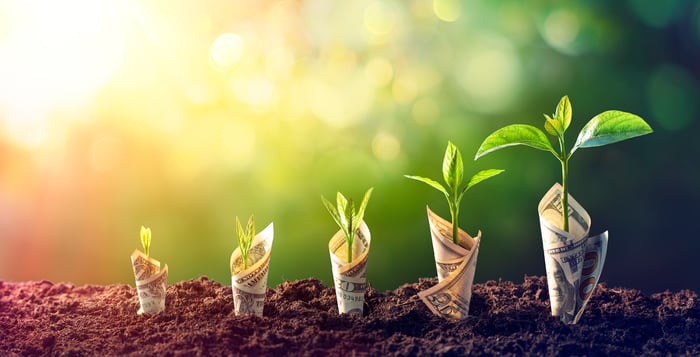 Even with a market cap of just $1.1 billion, this marijuana company is preparing itself to give tough competition to the bigger MSOs. Columbia Care operates 131 facilities, out of which 99 are retail stores. The company has grown itself with smart acquisitions. It recently acquired Colorado-based Medicine Man, and in June it completed its buyout of Green Leaf Medical, strengthening its positions in Colorado and the Mid-Atlantic.

Although these acquisitions are burdening its short-term cost structure, they will bring in profits in the coming years. Columbia Care also targets limited license markets that are careful of how many licenses they issue. This helps the company garner a loyal customer base for its brands.

These strategies led to another great quarter, with revenue surging 144% year over year to $132 million in the third quarter of 2021. It also recorded an outstanding jump of 634% in adjusted earnings before interest, taxes, depreciation, and amortization (EBITDA) to $31 million from Q3 2020. During the same period ended Sept. 30, it also grew its gross profit margin to 49% from 39% a year ago. Besides the bigger markets of California and Colorado, limited license markets like Massachusetts, Ohio, Pennsylvania, Illinois, Maryland, and Virginia also contributed to the performance.

Columbia Care’s management expects some recent headwinds (delays in the opening of dispensaries and in the implementation of recreational markets in the states that recently legalized it) to affect full-year results. The revised guidance now includes revenue to come in the range of $470 million to $485 million, adjusted EBITDA in the range of $85 million to $95 million, and adjusted gross profit margin to be around 46% for 2021.

The company isn’t profitable yet, but with wise acquisition strategies and expansion plans, it won’t be too long until it starts earning profits.

GrowGeneration is not a pure-play cannabis company but a pick-and-shovel cannabis company. This hydroponics supplier sells products and equipment used by marijuana growers. With a market cap of just $977 million, the company has a wide network of 62 stores nationally and has managed to grow its revenue and profits by an outstanding amount. In the first nine months of 2021, its revenue has surged to $331 million compared with $131 million in the same period a year ago. Net profits have also increased to $16.8 million from $3.8 million for the nine months ended Sept. 30, 2020. The company expects to further add $15 million in revenue annually from its recent acquisition of Washington-based Hoagtech Hydroponics.

Projecting the same headwinds as Columbia Care, GrowGeneration also revised its 2021 guidance. It now expects full-year 2021 revenue to come in the range of $435 million to $440 million and adjusted EBITDA guidance to be in a range of $41 million to $43 million. It also plans to open 15 to 20 more stores next year. Management believes these headwinds will sort out by the second half of 2022.  If the company manages to hit the upper end of the guidance, that will be a 128% increase from its 2020 revenue — impressive growth for a small company.

This pure-play cannabis grower doesn’t have a vast presence yet, but with just 40 stores, it is making a mark in the domestic markets. In its recent third quarter of 2021, ended Sept. 30, total revenue surged 41% year over year to $215 million.

Cresco also follows the same strategy of targeting limited license markets like Pennsylvania, Illinois, and Ohio. This strategy has also benefited Cresco, helping it build a loyal customer base for its popular brands like Mindy’s Edibles, High Supply, and more that brought in $106.2 million in retail revenue in Q3 (the rest came in from wholesale revenue).

It has mostly taken advantage of the new recreational market in Illinois that has brought in huge sales since the state legalized it in January 2020. As of November, the state had already broken its record last year of $1 billion in recreational cannabis sales.

The company recorded adjusted EBITDA of $56 million, compared with $40 million in the year-ago quarter. A net loss of $263,000 in Q3 came in as a disappointment, compared with a net profit of $25 million in Q3 2020, due to a noncash impairment charge of around $290 million.

Management stated that this charge was related to the company’s “exit from third-party distribution agreements in California.” But the good news is despite a net loss, Cresco reaffirmed its 2021 guidance. It still expects revenue to come in the range of $235 million to $245 million, adjusted EBITDA margin of 30% for 2021, and a gross profit margin above 50% for the rest of 2021.

Do not be disheartened by the recent downfall of marijuana stocks. I believe this presents a lucrative opportunity as growth stocks take time to show their full potential. As the burgeoning and recession-resistant cannabis industry expands, so will these three companies. Analysts see upsides of 126%, 210%, and 106% for GrowGeneration, Columbia Care, and Cresco Labs’ stock, respectively, in the next 12 months. All three pot stocks are trading below their 52-week highs, making it the right time to put in your money.