If you have money you can afford to spend on stocks, now may be a great time to do so. Many top growth stocks have been falling in value in recent months, and deal-hunting investors have plenty of options to choose from.

Three stocks near their 52-week lows that are worth taking a closer look at right now are Tilray (NASDAQ:TLRY), Block (NYSE:SQ), and Palantir Technologies (NYSE:PLTR). While they were all in negative territory last year and underperformed the S&P 500, they could be attractive buys for long-term investors to spend $5,000 on. 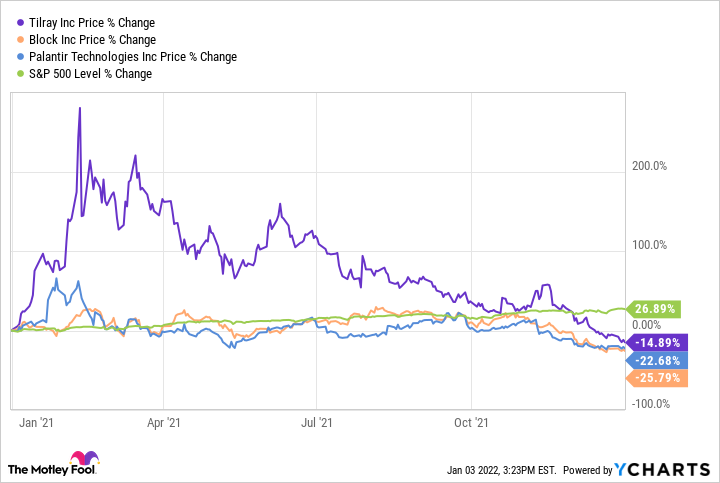 Cannabis-producer Tilray is trading at around $7.50 per share, and that’s after coming off a recent 52-week low of $6.97. You have to go back to October 2020 for the last time the pot stock was trading below $7 with any regularity. Like some of its rivals in Canada, the company has plenty of growth that it’s pursuing, including in a U.S. market that remains off-limits due to the federal ban on pot.

Tilray hopes to achieve $4 billion in annual sales by 2024 by expanding in the U.S. and internationally and lengthening its reach within Canada. That’s not far away, and with the company generating $168 million in sales during its most recent quarter (for the period ending Aug. 31, 2021), it’s at a current annual run rate of $672 million.

Tilray will likely be busy with mergers and acquisitions in the future. It recently acquired Colorado-based Breckenridge Distillery, which will help position it for the eventual launch of cannabis beverages in the U.S. But more moves will be necessary for it to achieve its optimistic goals. In 2021, it bought MedMen Enterprise‘s convertible debt, which will give the Canadian producer a possible way to acquire a majority stake in the multi-state marijuana operator — which likely won’t happen until marijuana becomes legal in the U.S. or Tilray moves off the Nasdaq.

There’s some risk here since investors are betting on Tilray to meet some lofty long-term goals. If you’re willing to take on that risk, Tilray could be an attractive investment right now. It has loads of potential and a discounted stock price, so there’s plenty of upside for the cannabis company, especially if it meets its targets. 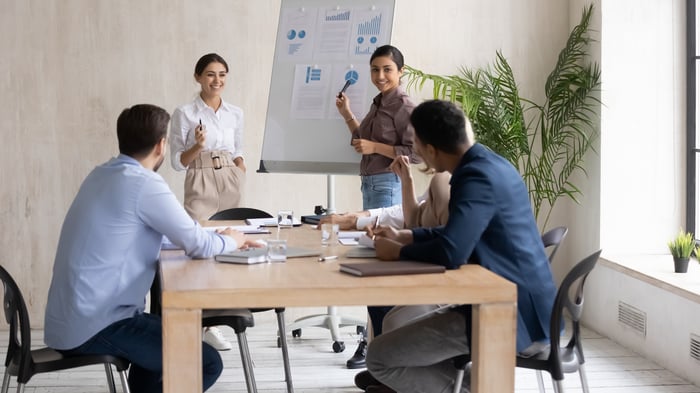 The stock of Block, the fintech company formerly known as Square, hasn’t been trading this low since October 2020. For a business with so much growth on the horizon, this could be a great place to invest $5,000 right now.

Through the nine-month period ending Sept. 30, 2021, Square’s net revenue of $13.6 billion has more than doubled from the $6.3 billion that it generated a year earlier. The company also turned a profit of $243.1 million during that time (versus a loss of $80.9 million in the prior-year period).

There are two intriguing opportunities for investors in Block. The first is through the growing popularity of cryptocurrencies. During the first three quarters of 2021, the company generated more than $8 billion in Bitcoin-related revenue, which is close to three times the $2.8 billion it posted a year ago. For bullish crypto investors, Block can be an excellent way to indirectly invest in Bitcoin (which can be highly volatile).

The second way that Block looks to be appealing is the success it may achieve through a stronger economy this year. Its point-of-sale devices make it easy for companies to conduct business, and that can lead to significant growth.

In addition, Block’s recent acquisition of Afterpay, an Australian-based buy now, pay later company, could unlock another growth driver for the business, especially amid rising costs and a need for consumers to defer payment on big-ticket purchases. The $29 billion all-stock deal didn’t do investors any favors in the short term due to the dilution, but it’s an acquisition that may pay off in droves in the years ahead.

Tech-company Palantir has been a popular stock with retail investors. However, it’s been struggling of late. Investors also need to go back to Fall 2020 for the last time it was trading this low — at less than $19 a share.

For long-term investors, there’s plenty to like about Palantir. The business serves multiple industries, providing data and analytics solutions for defense, automotive, and many other sectors. Palantir projects that its revenue will rise at a rate of 40% this year to more than $1.5 billion. And over the next four years, the company doesn’t expect that to slow down by much and expects annual growth during that time of at least 30%.

The data-oriented company has been winning over customers at a rapid rate, reporting that its commercial-customer count in the third quarter (period ending Sept. 30, 2021) grew by 46% quarter over quarter. When compared to Dec. 31, 2020, that percentage climbs to 135%. And the contracts it’s signing aren’t small — 18 of the 54 deals it closed during the past quarter are worth at least $10 million.

However, investors may need to be patient with the company, given its losses have totaled $513 million over the trailing 12 months. That could deter some risk-averse investors and keep the stock down.

But the good news is Palantir has generated positive free cash flow in each of the past three quarters. The business looks to be on a strong path forward, and investing in it today, while its shares are struggling, could prove to be a great move in the long run.