Tilray, Inc (TLRY) is one of the largest cannabis companies globally, as it reported a revenue of $513M in FY21. Tilray is involved in both recreational and medical cannabis research, cultivation, production, and distribution globally. The Canadian-based company has grown tremendously since its inception in 2014. In September 2018, Tilray partnered with Novartis (NVS) to distribute medical cannabis products in authorized global markets. These include Australia, Canada, Germany, Israel, Latin America, New Zealand, Poland, and Portugal.

Canopy Growth Corporation (CGC) is also a Canadian-based cannabis company. Canopy produces and sells both recreational and medical cannabis within Canada and other countries globally. These include the US, Germany, and United Kingdom. The company also expects to distribute to Australia, Denmark, Peru, and Brazil. In Q3’21, Canopy expanded its operations in Canada by opening 305 new retail stores.

In the US, cannabis remains a prohibited substance by the federal government through the Controlled Substances Act of 1970. However, as of October 2021, some form of medical cannabis is legalized in 43 US states. In addition, 32 of these states have decriminalized cannabis. Today, there has also been growing support for the legalization of cannabis amongst Democratic and Republican politicians. As a result, both Tilray and Canopy have planned their future forays into the US market upon federal legalization of cannabis.

Tilray reported FQ1’22 ( August 2021, post-acquisition ) revenue of $168M, an increase of 26.8% QoQ ( May 2021, post-acquisition ). Tilray posted $513.1M in revenue for FY2021 (ending May 2021), increasing 27% YoY. Furthermore, Tilray also reported an impressive adjusted EBITDA growth of 598% in FY21. It shows that Tilray’s strong YoY growth may be sustainable. Some of the growth was attributed to its US-based beverage and hemp food companies. However, most of it was from the merger between Tilray and Aphria. Cannabis’ growth in Canada and globally is driven primarily by 2 factors: the COVID-19 pandemic and rising demand from emerging markets. Cannabis was proven to be an essential product during the pandemic. In Canada, cannabis sales reached $2.6B in 2020, doubling that from 2019. In the US, legal cannabis sales reached $17.5B in 2020, an increase of 46% YoY.

Furthermore, it seems that Canopy’s growth is slowing down while Tilray is still on a stable climb. Canopy’s poor performance in FQ2’22 could be attributed to Canopy’s lack of adaptability to consumers’ rapidly changing preferences in Canada. Furthermore, there have been delays reported for Canopy’s US portfolio, including Biosteel beverage products. These delays have decimated Canopy’s gross margins due to inventory write-downs in Canada and underperformance in the US market.

In the depths of the COVID-19 pandemic, vice industries thrived during the widespread lockdown. The public stocked up on alcohol, cannabis, and other substances to cope with the social isolation. For those living in legalized recreational US states, an average of 43% to 48% of people use cannabis in 2020. Kelly Nielsen, who runs BDSA’s insights and analytics department, said that “close to 50% market penetration is really compelling, as alcohol penetration is around 60%”.

Mature markets like Colorado and Oregon have reported an increase of 26% and 29% YoY in sales, respectively. Emerging markets like California reported an increase of 57% YoY in sales. In addition, Illinois’ medical and recreational cannabis market ( legal as of 2020 ) reported more than $1B worth of sales in 2020. It shows that the US cannabis market has tremendous upside potential for growth, despite the current illegal federal status. As seen below, we believe the legalization trend will likely continue, especially with the public stance towards cannabis improving over time. 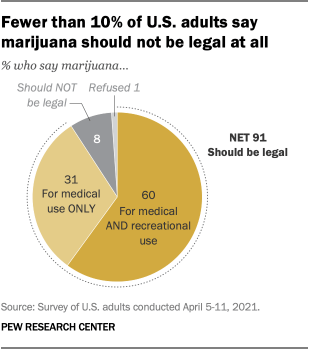 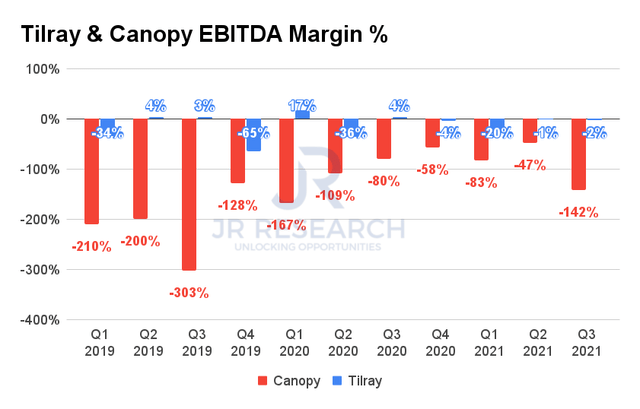 Tilray postulated that global cannabis sales will be worth $300B by 2030. It represents a CAGR of 28% from 2021 to 2030. Therefore, the market opportunities for Tilray and Canopy look to be immense moving forward.

Notwithstanding, Tilray and Canopy have posted GAAP EBITDA losses so far attributed to the over-supply of cannabis in Canada due to excess production capacity. As of 2019, Tilray had 300K kilograms, while Canopy had a 69K kilograms annual cannabis production capacity within Canada. Both Tilray & Canopy recently cut down on their production capacity to improve profitability. The production oversupply is the key reason why both companies are highly interested in entering the US market. America accounted for the most significant global cannabis consumption with an 82.96% share in 2020.

In August 2021, Tilray acquired MedMen Enterprises, a Los Angeles-based cannabis retailer. It has set a path for which Tilray may enter the US cannabis market in the future. The acquisition contract allows for equity convertible bonds, representing 21% equity for Tilray upon legalization. With Tilray’s equity investment, MedMen is set to expand its business in major US markets further. These include California, Florida, and Illinois. In FQ4’21, MedMen reported revenue of $42M, an increase of 53.9% YoY. It represented an increase of 31.3% from FQ4’19. MedMen also has 27 nationwide retail stores, most of which are in California and Florida.

In April 2019, Canopy acquired cannabis company Acreage Holdings Inc. Though Acreage is based in Canada, the company has an extensive distribution operation in the US. The acquisition contract allows Canopy to acquire 100% of Acreage shares for $3.4B upon FDA legalization. In October 2021, Canopy also announced that it is acquiring Wana Brands for $297.5M. Wana Brands is the leading cannabis gummy brand in the US and Canada by market share. The gummy category accounted for 71% of total sales for edible cannabis products. Upon federal legalization of cannabis in the US, Canopy will own 100% of the outstanding shares of Wana. Currently, Wana Brands distributes to 11 states and will expand to more than 20 states by 2022.

The Future of Legalised Cannabis

In its July 2021 Shareholder Letter, Tilray reported that 47 in 196 countries had legalized medical cannabis. In addition, there are 4 countries with legal recreational adult use, including Canada, Georgia, Mexico, and Uruguay. Europe and North America have been projected to be the fastest-growing cannabis market globally in the next 5 years. There has been an increasing adoption of medical cannabis by their respective healthcare systems. It includes recreational cannabis legalized by individual US states or EU countries.

Today, there has been growing support for the legalization of cannabis amongst Democratic and Republican politicians. In November 2021, a Republican-led attempt to legalize marijuana was reported. The States Reform Act is expected to be filed by the end of November. The bill proposed to reschedule cannabis federally and be similarly managed like alcohol. Here are some of the key points:

We believe that the U.S. is closer to legalization than it ever has been, but the process will take time. We’re planning the seven, eight steps, moves ahead in the U.S. to build up an infrastructure—brands, production facilities, distribution networks, things like that—for the eventual entry, all without buying a product that puts us off side on our Nasdaq listing. (from WSJ article) 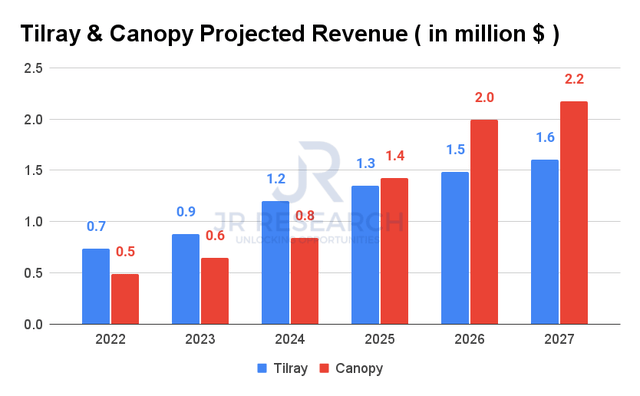 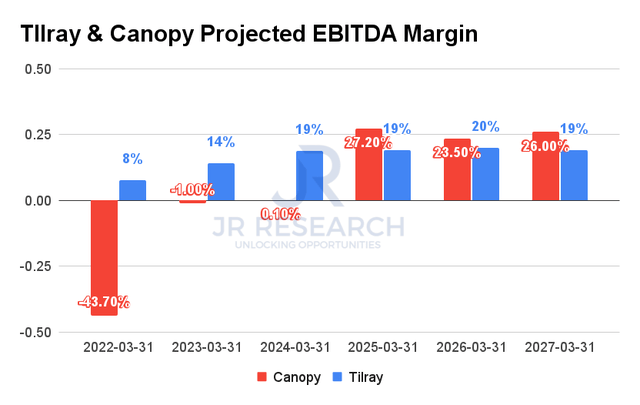 The demand for medical and recreational cannabis will likely grow stronger over the years as more countries legalize cannabis, especially in the US. As a result, Tilray is projected to post an EBITDA margin of 9.8% in FY22. As for Canopy, it is projected to break even by FY2023/24 and post an impressive EBITDA margin of 27.20% by FY2025. Canopy’s improvement in operating leverage is partly attributed to the drastic closures of its excess production plants, helping it to increase efficiencies in its global operations. Canopy also exited international operations in South Africa and Colombia to reduce operating costs further. Canopy CEO David Klein emphasized: “When I arrived at Canopy Growth in January, I committed to conducting a strategic review to lower our cost structure and reduce our cash burn.” 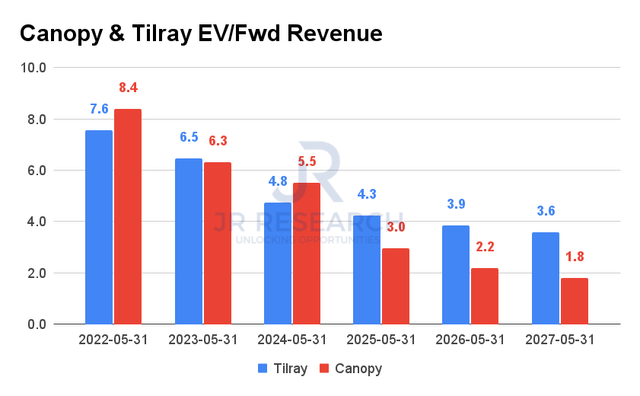 Tilray is currently trading at an EV/NTM revenue of 7.27x, which is markedly lower than Canopy’s 10.82x. Nonetheless, it’s significantly higher than its comps set mean of 6.04x.

Investors who choose to add TLRY and CGC now should understand that an appreciable amount of growth premium has been baked into their valuations. These 2 companies have undoubtedly been scaling up to enter the US market upon federal legalization. However, no one can speculate when the US FDA legalization will happen. Furthermore, there is also plenty of competition from other cannabis distributors within the US itself.

Therefore, we rate both Tilray and Canopy stock at Neutral for now.