Canopy Growth (NASDAQ:CGC) has been a disappointing investing vehicle. Despite a multi-billion-dollar partnership with alcohol giant Constellation Brands (NYSE:STZ), the Canadian cannabis company’s shares lost over 62% of their value during the prior 12 months.

Should retail investors follow Wall Street’s lead on this top marijuana stock or is this pessimism overdone? 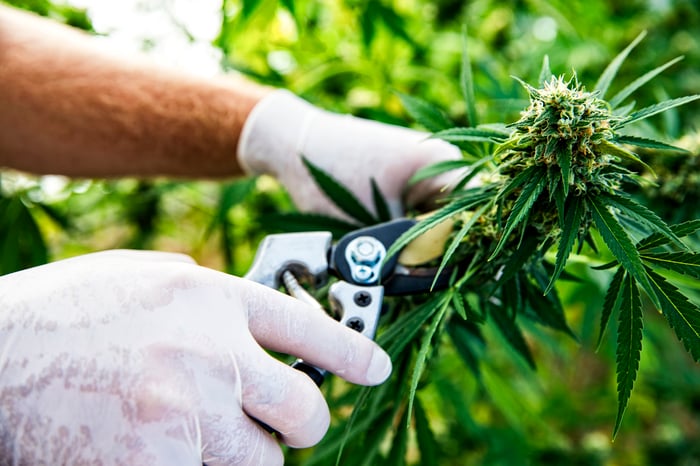 Alex Carchidi: If you’re looking for a safe investment in cannabis, it’s important to recognize that Canopy Growth is trending in several wrong directions at once.

In the year since the second quarter of its fiscal year 2021 (which ended Sept. 30, 2020), Canopy’s quarterly revenue has fallen by 3%, which is a sign that the company is having a hard time expanding its share of the Canadian recreational market. At the same time, its quarterly cost of goods sold (COGS) has risen by 63.8%, leaving its gross margin in the red by 54%. To make matters worse, total quarterly expenses have risen as a percentage of revenue by more than 37% year over year, which implies more bad news for shareholders.

In short, Canopy may have been profitable for most of 2021, but it’ll have a hard time returning to profitability in the short term for reasons that are largely beyond its control. Per its most recent earnings report in Q2, the company is struggling with the Canadian cannabis market, which is flooded with excess inventory, thereby pushing down sales and also the price of cannabis. Likewise, management claims that shipping and distribution costs are rising. And, management freely recognizes that revenue growth will be “more modest than previously anticipated” through the remainder of its 2022 fiscal year.

These issues will probably resolve over time, and it’s likely that other Canadian cannabis cultivators are in the same boat as Canopy Growth. But investors aren’t obliged to buy shares of Canopy or any other unprofitable company, so it’s probably better to look for a business that’s in better condition today.

George Budwell: There’s no denying that Canopy hasn’t lived up to expectations as a growth vehicle. The company hasn’t been able to overcome the glut of fundamental problems in its home market of Canada, as well as the slow pace of legalization for marijuana at the federal level in the United States.

The long and short of it is that Canopy’s bid to become the king of cannabis simply hasn’t panned out. In fact, the company’s current quarterly sales would only qualify it as a second-tier multi-state operator in the United States. That’s a far cry from where shareholders thought Canopy would be four long years into this Constellation partnership. All hope isn’t lost, however.

Canopy has two major jumping-off points into the all-important U.S. market upon federal permissibility. Namely, the company has buyout agreements in place with both Acreage Holdings and Wana Brands once marijuana reform is enacted in the United States. Taken together, these two seminal deals should cement Canopy’s place in the pantheon of cannabis giants. The one drawback, though, is that the U.S. political machine doesn’t appear ready to pull the trigger on countrywide marijuana legalization anytime soon.

Whenever this touchstone event occurs, however, Canopy should be sitting pretty. The bottom line is that Canopy ought to own an outsize portion of the U.S. cannabis market once everything is said and done. It may very well take several more years for the company’s underlying value proposition to materialize, however. That’s not a bad thing for patient investors, but this pot stock is arguably best suited for investors with a long-term mindset.