We created an equal-weighted basket of Real Estate sector stocks, including AFC Gamma, IIPR, NewLake, and PowerReit (Chicago Atlantic IPO’d in December), shown by the green line in the graph. We also created an equal-weighted basket of the top 5 MSOs by market cap, Cureleaf (OTC:CURLF), GTI (OTC:GTBIF), Trulieve (OTC:TCNNF), Verano (OTC:VRNOF) and Cresco (OTC: CRLBF), shown by the orange line on the graph. We indexed the price of each basket so that 10/1/21 equals 100%. 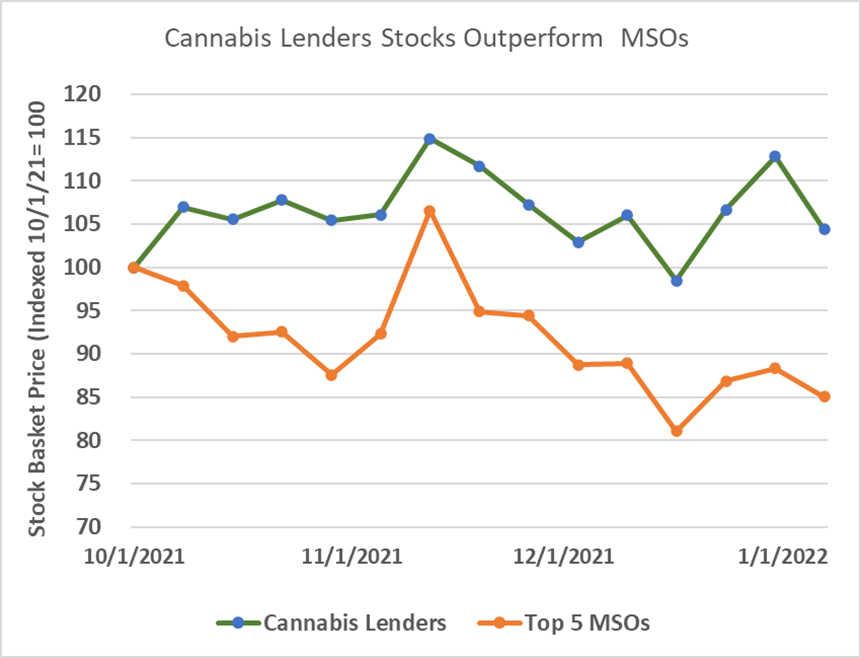 The lender basket significantly outperformed the MSO basket over the period, scoring a 5% gain compared to a 15% loss.

The Viridian Cannabis Deal Tracker provides the market intelligence that cannabis companies, investors, and acquirers utilize to make informed decisions regarding capital allocation and M&A strategy. The Deal Tracker is a proprietary information service that monitors capital raise and M&A activity in the legal cannabis and hemp industry. Each week the Tracker aggregates and analyzes all closed deals and segments each according to key metrics:

Since its inception in 2015, the Viridian Cannabis Deal Tracker has tracked and analyzed more than 2,500 capital raises and 1,000 M&A transactions totaling over $50 billion in aggregate value.

The preceding article is from one of our external contributors. It does not represent the opinion of Benzinga and has not been edited.

Since mid-December, the Real Estate Sector, one of the 12 subsectors into which Viridian Capital classifies cannabis companies, has accounted for approximately 89% of the $182M total equity capital raised.

Demand for loans is strong, and the companies above can lend money at very high spreads to their cost of capital. There is a sense of urgency to deploy capital as banking reform may change the playing field significantly.

The diverging performance of these two sectors signals a diminished belief in the likelihood of near-term banking reform/ legalization. The SAFE Act would increase the market value of the lenders’ portfolios but decrease their long-term ability to maintain the large spreads currently enjoyed.

MSO stocks have been drifting lower despite strong operating results. One possible reason is the observed slowdown in revenue growth in several states. We have shown in previous graphs that the MSOs are massively cheap relative to tobacco, alcohol, and other CPG’s but liquidity bolstering uplistings depend on legalization steps which appear stalled.

Short of legalization, we believe one likely catalyst to ignite an upward move in the MSOs is more significant M&A activity similar to Trulieve/Harvest Health. Viridian Capital equity research continues to point out potential beneficiaries of this consolidation, which we view as likely in 2022.

Industry Sector (one of 12 sectors, from Cultivation to Brands)

Dollar value of the transaction

Region in which the deal occurred (country or U.S. state)

Status of the company announcing the transaction (Public vs. Private)