The psychedelics sector just got an important boost in the form of an endorsement from entrepreneur, would-be space explorer, and Tesla founder Elon Musk. In a live interview at CodeCon2021,1 he said, “I think generally people should be open to psychedelics,” adding “A lot of people making laws are from a different era. As a new generation gets into political power, I think we will see greater receptivity to the benefits of psychedelics.”2

Musk’s comments are seen as highly significant due to his involvement in disruptive tech and because he has proven his ability to make or break fortunes at a word — for example, a tweet from Musk that was seen as supportive of Dogecoin triggered a jump in value of 800% for the meme cryptocoin.3 His words could further boost interest in psychedelic stocks such as the Defiance psychedelic ETF, PSY, which brings retail and institutional investors access to this increasingly high profile space.

Musk isn’t the only famous name who’s interested in psychedelics. Former heavyweight champion Mike Tyson credits them with saving his life,4 saying “I believe if I’d been introduced to the benefit of psychedelics for therapeutic use early in my professional career, I would have been a lot more stable in life5.” Tyson is now an investor in Wesana Health, a life sciences company that just announced the acquisition of PsyTech, a medical psychedelics community,6 and committed $1.5 million to a MAPS-led study into using MDMA to treat traumatic brain injury (TBI).7

Lamar Odom, former Olympic gold medalist, is also trying to advance psychedelic medicine in the US, and will be speaking in at least two conferences over the next 2 months.8 And possibly less well-known, but more influential, is the director of the National Institutes of Health (NIH), Francis Collins, who agrees that psychedelics show promise for mental health.9

There’s good reason for celebrities, entrepreneurs, investors, and thought leaders to support psychedelics-based therapeutics. The time is ripe for a new wave of treatments for mental health issues that don’t respond to existing treatments and appear to have been abandoned by big pharma. A recent survey revealed that 74% of psychiatrists would prescribe psychedelics if the FDA approved them for treatment-resistant depression.10

The COVID-19 pandemic pushed mental health disorders sky-high, with depression and anxiety increasing fourfold in the US and doubling in the UK,11 while the preponderance of mental health issues helped remove any shame in seeking help. Numerous studies have already demonstrated the efficacy of psychedelics in treating anxiety,12 addiction,13depression,14PTSD,15 and OCD.16

As a result, the market is growing fast. In December 2020, Research and Markets predicted that it would reach $10.75 billion by 2026,17 but by July 2021, it had revised that forecast to $69 billion.18 Psychedelics stocks are riding high, with 5 trading on the NASDAQ and one, Cybin, trading on NYSE American.19 Leading company ATAI Life Sciences is worth over $2 billion and Compass Pathways is valued at $1 billion, while the number of psychedelics companies seems to keep growing, with the Berlin Registry of the Mind Foundation listing over 130 companies.20

In many ways, psychedelics is riding the coattails of cannabis. Medical cannabis has succeeded in eroding the stigma around taking marijuana, and is helping speed the dissolution of doubts surrounding other previously-banned substances like psychedelics. As a result, some people who invested in weed stocks like a cannabis ETF are considering psychedelics too.

Recent development testify to the strength of psychedelics

The psychedelics sector is staking its claim as a serious medical and scientific concern. Conferences are taking place around the world, most recently the multi-disciplinary Insight Conference in Berlin.21 Participants, who included an employee of the German Federal Authority for Drugs and Medical Devices, discussed neurological processes, presented the latest research, and considered the effects of a range of psychedelic drugs.22

Next month brings the Wonderland conference in Miami,23 with speakers including Rick Doblin, executive director of MAPS, and Dr. Robin Carhart-Harris, founder of the Centre for Psychedelic Research at Imperial College London, as well as Tyson and Odom. Industry events like these are crucial to help advance the sector, allowing key players to network, share ideas, and explore obstacles and opportunities.

At the same time, the legal attitude towards psychedelics is changing rapidly. The Seattle city council just voted unanimously to decriminalize psychedelics,24 becoming the biggest city to do so, and there are reasons to hope that similar moves could take place on a federal level in the near future.

In September, a US government body approved funding for a study into the use of psychedelics for therapeutic purposes for the first time. The National Institute on Drug Abuse (NIDA) gave the green light to a project run by Professor Matthew Johnson at Johns Hopkins University.25 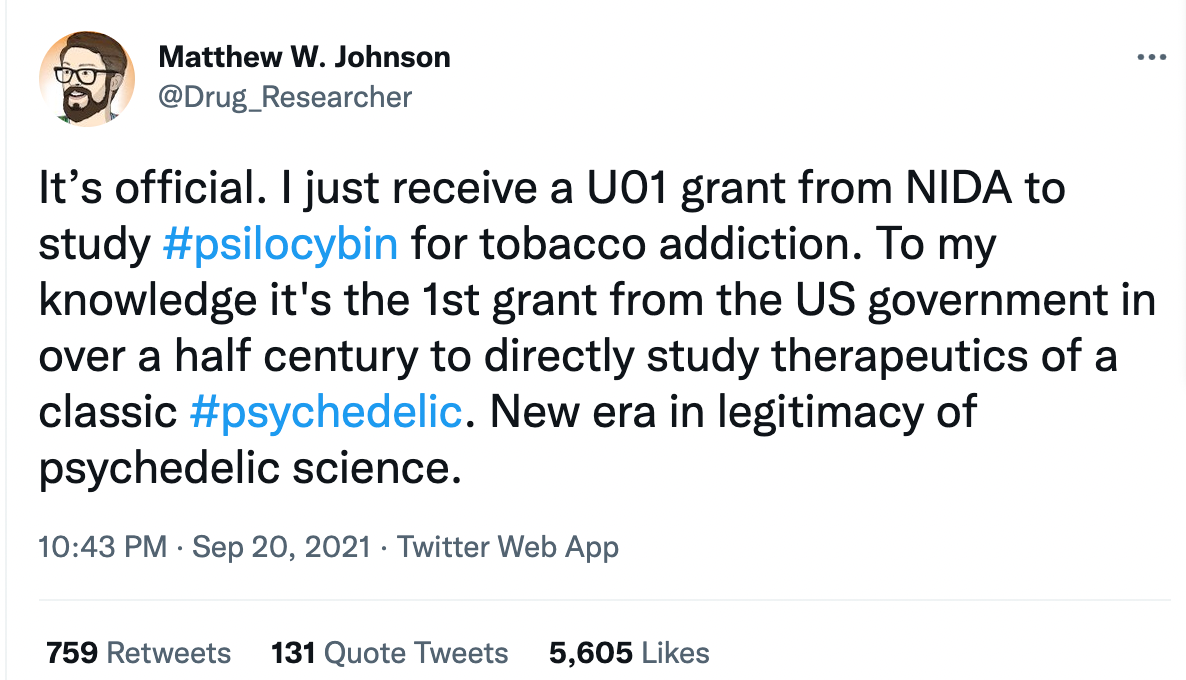 Psychedelic researchers declared this “a significant moment for the field.” The government tends to award larger grants than private philanthropists, which allows researchers to investigate more deeply. “It is that type of non-sexy research that is the backbone for everything in the long term,” says Johnson.26

In the same month, the White House issued a press release in which Regina LaBelle, Acting Director of National Drug Control Policy, recommended reducing the barriers to scientific research for Schedule I substances, which includes most psychedelics. “The Biden-Harris Administration strongly supports expanding the research of Schedule I substances to help advance evidence-based public policy,” states the report.27

Additionally, a new bill has been proposed to the Senate to federally decriminalize the possession, cultivation and delivery of mescaline and psilocybin. It’s by no means clear that it will pass, but Senate Bill 631 could pave the way to more widespread research and development.28

The backing of famous names like Elon Musk is just another example of the rapid rise of psychedelics, from banned drug of choice by dropouts to the saving grace of athletes. People who previously bought shares in medical cannabis stocks or a weed ETF are among investors who are paying close attention to psychedelics stocks.

For investors who don’t want the pressure of choosing the best psychedelics stocks, a psychedelic ETF like Defiance’s PSY could be an alternative. By investing in a psychedelic ETF, you can help mitigate your exposure to risk by spreading your investment across a number of promising companies involved in the research, production, distribution, and delivery of psychedelics and psychedelic-based treatments.

5“‘I’m a lighter me’: Can Mike Tyson and psychedelics help boxers with brain trauma?” June 14, 2021 https://www.theguardian.com/sport/2021/jun/14/psychedelics-boxing-brain-trauma-mike-tyson-therapeutic-use

19“A List of Psychedelic Stocks and Where They’re Traded” July 30, 2021 https://microdose.buzz/news/a-list-of-psychedelic-stocks-and-where-theyre-traded/

20“Psychedelics are returning to the world of medicine, here’s how?” October 3, 2021 https://thefrontierpost.com/psychedelics-are-returning-to-the-world-of-medicine-heres-how/

21“CLARITY AND DEPTH: TOWARDS A SCIENCE-BASED DEBATE ON PSYCHEDELICS” June 4, 2021 https://mind-foundation.org/insight-21-clarity-depth/

22“Psychedelics are returning to the world of medicine, here’s how?” October 3, 2021 https://thefrontierpost.com/psychedelics-are-returning-to-the-world-of-medicine-heres-how/