Shares of Canadian cannabis company Hexo (NASDAQ:HEXO) (TSX:HEXO) dropped 11.8% this week, according to data from S&P Global Market Intelligence. The stock, which closed at $0.9531 last Friday, fell to as low as $0.78 a share on Wednesday, its lowest point in two years. The stock’s 52-week high is $11.04 per share and it’s down more than 77% so far this year. 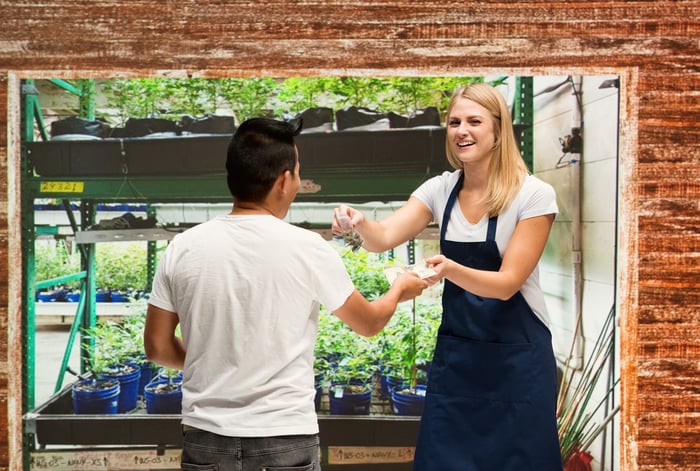 There are plenty of concerns regarding Hexo stock, not the least of which is the threat of it being delisted from the Nasdaq, as the stock has been mired under $1 a share for most of the month. Last year, the company, which was then on the New York Stock Exchange, was in a similar position before it did a 4-for-1 reverse split to raise its share price.

Hexo’s management has been a revolving door of late. Last month, company President and CEO Sebastien St. Louis stepped down, and on Tuesday, Hexo announced that Scott Cooper would replace him in both roles. The company also announced that CFO Trent MacDonald would be leaving the company on March 11 and that Dr. Michael Munzar was resigning, effective immediately, as chair of the company’s board of directors. He’ll be replaced by John Bell, the chairman of Stack Capital, Pure Jamaican Limited, and a former Canopy Growth chairman of the board.

To add to the changes, during its first-quarter earnings call, the company announced a new strategic plan called The Path Forward, to become the first Canadian cannabis company with positive net cash flow in 2022 by trimming costs, streamlining its organization, and improving margins.

Despite its problems, Hexo has the advantage of size. Among Canadian cannabis companies, only Canopy and Aurora Cannabis had more sales than Hexo in the last quarter.

Much of the cannabis company’s revenue gains were due to its recent acquisitions of Redecan, Zenabis, and 48North, which it completed in the fourth quarter. According to Hexo, with those acquisitions, the company will have the second-largest market share among Canadian cannabis companies and the top share in cannabis pre-rolls, capsules, beverages, and oils.

The key for Hexo is reducing costs, trimming redundancies, and finding synergies with the new additions.